Audiobook review: Murder in the East End by Jennifer Ashley 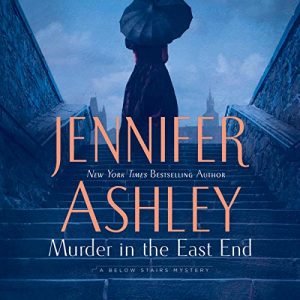 Murder in the East End picks up a few weeks or so after the conclusion of the previous tale. This time around Kat is called to action by Daniel McAdam when he learns that some children and a nurse from the local Foundling Hospital are missing. Kat cannot say no to helping, especially knowing her own daughter, Grace, was nearly left at the hospital after her birth.

I continue to enjoy the Kat Halloway Mysteries immensely. Kat is a take charge, no-nonsense cook who understands her place in the world and makes the utmost best of it. I love everything about Kat: her kind heart, her keen mind, her amazing cooking talents, her motherly instincts. I love following her and hearing her thoughts – her hopes, her worries. I also love the author’s attention to detail: the vivid images created – the foods, the locations, the people.

Once again, the author makes this story about so much more than solving a mystery. As life changes around Kat, I appreciate that we witness how Kat must find ways to balance her job, her daughter, and helping solve mysteries. Kat’s emotions are strong, but she has a good head on her. I love witnessing how events play out and that her even-keeled nature and moral compass don’t get swayed. Kat’s decisions come with consequences, and while things tend to work out for Kat, we see that it’s not always easy. Many times I’m on edge, wondering what will happen.

Not only does Ms. Ashley weave an engrossing mystery filled with personal drama, but she addresses injustice. I admire those who stand up to unfairness, especially in a time when women’s voices were mostly ignored. The author introduces a new character and potential crime sleuth: Miss Townsend. Miss Townsend along with Lady Cynthia, Mr. Thanos, and Daniel are important friends and critical voices in a world that tend to oppress all but the most wealthy.

Narration: Kat’s story is shared via her first person POV. The narrator provides a strong, working class female British accent, very suiting to Kat’s role. The narrator changes up her performance for dialogue, adjusting for social class, gender, and age. She is most successful with the other females and the working class characters. Her males are slightly deeper, and overall, each character is unique.

In the end, Murder in the East End is an engrossing mystery filled with action, adventure, and a touch of personal drama. I love how Kat’s circle of trust and friendship is growing, and how Kat more people are acknowledging what a wonderful woman Kat is.

My Ratings
Story: A-
Narration: B+

When young cook Kat Holloway learns that the children of London’s Foundling Hospital are mysteriously disappearing and one of their nurses has been murdered, she can’t turn away. She enlists the help of her charming and enigmatic confidant Daniel McAdam, who has ties to Scotland Yard, and Errol Fielding, a disreputable man from Daniel’s troubled past, to bring the killer to justice. Their investigation takes them from the grandeur of Mayfair to the slums of the East End, during which Kat learns more about Daniel and his circumstances than she ever could have imagined.