Audiobook review: The League of Gentlewomen Witches by India Holton 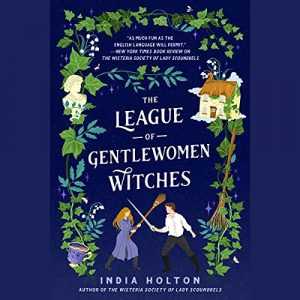 Charlotte would be a witch, if witches existed. She is the prophesied heir of Black Beryl and next in line to lead the League of Gentlewomen Witches. When the long-lost amulet of Black Beryl is discover, both the League and their arch-nemesis, The Wisteria Society (dreaded pirates!), vie for the prize. Charlotte, a prim and proper lady, would never work with a pirate like the handsome Alex O’Riley, so it’s a good thing that she’s kidnapped him (or has he kidnapped her?) and is forcing him to help her go after the amulet.

The League of Gentlewomen Witches is one of the most delightful, entertaining listens of the year. In her second Dangerous Damsels novel, Ms. Holton expands upon her magically-filled historical England by introducing listeners to the League of Gentlewomen Witches. The author weaves a whimsical tale using allusion, satire, and irony. The characters are endearing. I absolutely adore Charlotte, who relies on the writings and characters of Jane Austen to give her guidance and direction. She and Alex make such an adorable couple as they pretend to remain enemies and that pirates and witches are nothing alike. Their romance is innocent, yet so very hot.

Narration: The story is shared via the alternating third person POVs of a handful of characters, primarily Charlotte and Alex. The narrator employs a prim and proper British accent for her narrator and Charlotte. It’s soft but stern; think Mary Poppins. Ms. Knowelden doesn’t alter much her voice for gender or change the tone significantly during dialogue. However, she does add a very slight Irish lilt to Alex‘s dialogue (swoon). Instead of drastically altering the tone of her voice, she changes the cadence, volume, and accent. She adds a lot of enthusiasm and energy to Charlotte. Ms. Knowelden adds significant value to the listening experience.

The League of Gentlewomen Witches is a wonderful escapade and swoon-worthy romance. I love the humor and silliness, the adventure. I loved witnessing Charlotte’s transformation from trapped witch to free pirate. I adored the use of Austen’s heroines as Charlotte’s inner voices, helping her try to make sense of the bigger world and her new experiences. The adventure moved and flowed as the relationship developed and grew. I look forward to more Dangerous Damsels tales.

Miss Charlotte Pettifer belongs to a secret league of women skilled in the subtle arts. That is to say—although it must never be said—witchcraft. The League of Gentlewomen Witches strives to improve the world in small ways. Using magic, they tidy, correct, and manipulate according to their notions of what is proper, entirely unlike those reprobates in the Wisteria Society.

When the long lost amulet of Black Beryl is discovered, it is up to Charlotte, as the future leader of the League, to make sure the powerful talisman does not fall into the wrong hands. Therefore, it is most unfortunate when she crosses paths with Alex O’Riley, a pirate who is no Mr. Darcy. With all the world scrambling after the amulet, Alex and Charlotte join forces to steal it together. If only they could keep their pickpocketing hands to themselves! If Alex’s not careful, he might just steal something else—such as Charlotte’s heart.

Reviews in the Series:
The Wisteria Society of Lady Scoundrels by India Holton (Dangerous Damsels #1)