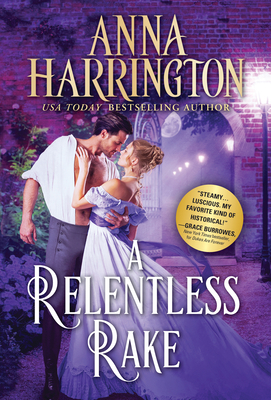 Alexander Sinclair, Earl of St. James, Alec, is one of the Lords of the Armory working to stop the evil Scepter. He is tasked by the Home Office to find out who and stop those who are trying to assassinate the Prime Minister. He enlists help of his half-brother, Nathaniel Reed.

Olivia Everett, respectable school mistress, is trying to find out what happened to her missing brother, Henry. Following a lead puts her in the path of some very bad men, but a masked vigilante saves her, even teaches her how to wield a knife. Little does she know her brother is a person of interest in a bombing that nearly killed the Prime Minister.

A Relentless Rake is the fourth exciting book in the Lords of the Armory series. Although each book is a standalone romance, there is an over-arching storyline that is best enjoyed when read from the beginning and in order. With that said, I was a bit taken aback when Alec tells Nathaniel that no one, including the men of the Armory, can know of his mission. This was a bit of a disappointment to me, as I love the theme of these men working to stop the mysterious, evil society. However, the story was a good one, and in the end, I didn’t miss the other characters as much as I thought I would.

At first, I wasn’t sure about the pairing between Alec and Olivia. He was overly hung up on her “innocence,” yet pressed his affections and attention. He didn’t cross a line at all, but rather he didn’t seem concerned about her reputation or how she’d be ruined, since he has no intention on marrying her (and she’s beneath his station). I was also annoyed at first that Olivia didn’t immediately pick up that the masked man is Alec. But all that aside, I ended up loving the pair together and enjoyed their romance.

The continuing story about Scepter is interesting, and I liked that the overall mission involved all the players rather than some mysterious unknowns. The story is a good balance between the romance and mystery. I enjoyed that the primary couple works as a team. Alec never tries to hold back Olivia, instead excepting her for who she is, including her intelligence, daring, and passion. They are both flawed, but willing to accept what comes their way as long as they work as a team.

Notorious rake Alexander Sinclair, Earl of St James, takes pride in displaying his sins. When he’s tasked by the Home Office with finding the men who attempted to assassinate the prime minister, his hunt leads him to Olivia Everett, a most proper schoolmistress who wants nothing to do with a profligate nobleman like him.

Unknown to her, Olivia’s brother, Henry, has been working with the revolutionary group planning to overthrow the government. Shocked and hoping to save her brother, Olivia agrees to help the persuasive earl. But they closer they get to uncovering the villains, the more Alec and Olivia will need to trust each other.