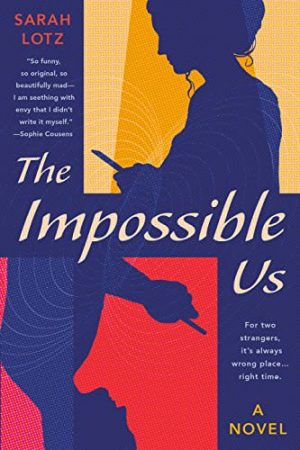 The Impossible Us
Author: Sarah Lotz
Reviewer: Nima
Rating: A+ for premise and writing, B+ for content

This was a tough book to rate. The Impossible Us by British author Sarah Lotz was unexpected in a really good way. Main characters Bee and Nick are incredibly normal people. Bee has given up on finding true love so she’s a serial Tinder dater, all about the one-night stands. No commitment. No chance of getting hurt. She’s empowered, running her own small business repurposing wedding dresses, but not especially heroic. She originally wanted to be a fashion designer and has slipped into this niche that suits her. Bloom where you’re planted and all that. Despite early promise, Nick is a failed writer in a failing marriage. He drinks too much and doesn’t seem to be able to quit smoking. His wife has pity on him so she hasn’t quite gotten around to divorcing him, hoping he can get on his feet before she pulls the plug. All of us can relate to dashed dreams along the path to paying the bills.

These two meet when a ranting email from Nick to a non-paying freelance client goes to Bee instead. He’s mistyped the address. Because he’s a writer and not without talent, it’s a really good rant and Bee feels compelled to respond, letting him know the object of his anger and distain has not received the missive. That should have been the end of it, but Nick has time on his hands so he writes back. The two begin exchanging emails. The banter is really excellent. Funny. Sarcastic. All the things we Americans love about British humor. For instance, there was a reference to someone who was in “tinfoil millinery land” referring to people who wear foil hats so space aliens can’t read their thoughts.

Oddly, there are a few discrepancies in their exchanges that come up over pop-culture references, but they are easily explained away. Bee calls their exchanges “e-mails” and Nick calls them “i-mails.” Ironically, I had to stop and look up a lot of those references since they are almost all unique to the UK—including some slang which was totally appropriate, just not in my mental reference library. Quickly, we learn that Bee and Nick are actually living in parallel universes. This premise has so much potential. What fantasy/sci-fi reader hasn’t imagined their life in another world? In a parallel universe I’m a successful pastry chef with my own television show on the Food Network. I beat Bobby Flay with my carrot cake (it really is remarkable) and am a regular judge on competition shows. I teach and tour, write cookbooks, and have my own line of baking products, currently on sale at Target.

We know at the outset this is a doomed couple. Even the casual movie goer knows you can’t cross the multiverse without a lot of intervention and danger. Spiderman just proved this and why it’s a really bad idea. It’s a non-starter so what’s there to talk about the entire rest of the book?

The rest of the book is… clever, full of real emotions like jealousy, loving someone enough to want the best for them at your own expense, and the mess that is real life—just superimposed on quantum physics.

I’m happy to report that Lotz does not follow the tradition of British authors who embrace the tragic ending. Her solution is, unfortunately, a little predictable. She brilliantly wrote herself into a corner and then took an easy-ish way out. I wanted it to be just as clever as the rest of the book. It wasn’t a cop out, but it didn’t seem proportional or carry the same energy as the lead up to it. I will admit to wanting a more “American” ending, more flourish and punch, but Lotz’s subtly is appreciated. She does not leave us wondering how the characters ended up or unsatisfied. I loved the premise. I loved the writing. I loved parts of the story and only liked others. I liked the characters, related to them in some ways, but wouldn’t want to be them. Is it worth reading? Definitely.

Bee thinks she has everything: a successful business repurposing wedding dresses, and friends who love and support her. She’s given up on finding love, but that’s fine. There’s always Tinder. Nick thinks he has nothing: his writing career has stalled after early promise and his marriage is on the rocks, but that’s fine. There’s always gin. So when one of Nick’s emails, a viciously funny screed intended for a non-paying client, accidentally pings into Bee’s inbox, they decide to keep the conversation going. After all, they never have to meet.

But the more they get to know each other, the more Bee and Nick realize they want to. They both notice strange pop culture or political references that crop up in their correspondence, but nothing odd enough to stop Bee and Nick for falling hard for each other. But when their efforts to meet in real life fail spectacularly, Bee and Nick discover that they’re actually living in near-identical but parallel worlds. With a universe between them, Bee and Nick will discover how far they’ll go to beat impossible odds.