“You made this?” I wandered closer. There were three metal chairs. The hunk of metal on the workbench was starting to resemble the three pieces that made up the back.

Liam crossed his arms. Had his chest always been that wide? “It’s just a hobby.”

I kept my eyes on his work. It was easier than seeing his sweaty, cut body. “I knew you did a few things here and there, like our wedding gift, but these chairs aren’t quick projects.”

“I’ve been playing around for a while, when I need a break from home repairs, or when I don’t have time to start another project before I leave again. Then the buddy I rent the room from in Williston was tossing these out last year. I told him he should do some shabby chic weld-over bullsh*t. So he loaded them in the box of my pickup without telling me.”

The corner of my mouth kicked up. A makeover, but with welding. “And you thought, ‘What the heck? I can do a shabby chic weld-over.’”

He grinned, and it brightened the entire shed. He’d been looking at me with eyes full of concern for so long, it was nice to see it absent from his smile. “I’ve done a few projects. Want to see?”

“Can I show her, Dad?” Owen sprinted to the other corner of the shop and tugged on a heavy canvas drape. Liam stopped beside him and helped take the cover off.

Watching him with his kids never failed to cheer me up. There was the ever-present tug at my heart. Derek and I had wanted kids. Someday.

I tensed, waiting for the tsunami of emotions to double me over. But it didn’t. Being with Liam and the boys made me feel like I hadn’t missed as much as I feared. That maybe, someday, I could have something like this again.

The cache was revealed, and I put my hopes aside. Intricately welded lamp bases. Custom coatracks to hang on the wall. A sign that said Live, Laugh, Love.

“You did all this?” They weren’t rudimentary, nor were they simple designs like the sign. They were intricate work that had required a skilled hand.

“Yeah.” He shoved a hand through his hair until sections were sticking straight up. Unlike when I went without a shower for too long and my hair hung limp and lifeless, he got sexier the more rumpled his hair was.

Did I just describe Liam as sexy?

Heat tickled through my body, moving to forgotten places. It was a mere observation, nothing more. And it was hot in the shed. 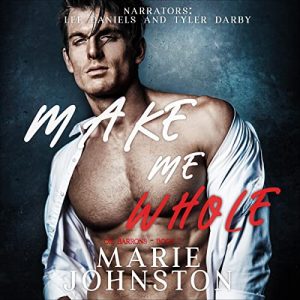 I had a perfect life. Schoolteacher. Married to my high school sweetheart. Little starter house that we called charming but was really just old. All I needed was the two-point-five kids and I’d be living my perfect dream. Then my husband died.

After the funeral, I had a breakdown that lasted for a month…or twelve. But now I’m reemerging, healing, finding my way. It’s time to learn who I am now, and whether or not I can fix a leaky sink. And by my side, the entire time, is my husband’s best friend, Liam. The single dad knows a thing or two about personal struggles, and about how to replace faucets.

With Liam, I feel alive again. Confident. Capable. Liam has become my best friend too. Except if my parents, my in-laws, and the rest of the town had any say, I’d stay far away from him and his bad boy reputation.

How do I admit to them what’s so hard to admit to myself? That I’m starting to look at him like he’s more than a friend. That the heat in his eyes when he looks at me is far beyond friendly. That like it or not, Liam makes me feel whole again.

Lee grew up playing sports, being one of the guys, and generally avoiding all that “girly stuff” with the exception of one thing – romcoms. As she developed into a young actor, she began to dismiss that secret part of herself – that is, until she auditioned for her first romance audiobook production in 2019. It rekindled her love of those modern classic romcoms she watched as a kid, and brought her joy and satisfaction knowing that she could share these stories with other women. In addition to playing sports, hanging with the guys, she now revels in the “girly stuff” she once made fun of.

She drinks a nice glass of Cabernet Sauvignon or a chai tea latte while prepping a romance manuscript.

A Voice That Brings Stories To Life.

Tyler Darby has completed over 30 audio books. He can do most American and European accents, along with a host of characters and personalities from villainous to goofy and everything in between.  Tyler’s voice has been described as gritty, sonorous, deep, authoritative, dark, brooding, clear, articulate, powerful, expressive, and engaging. He specializes in romance, fantasy, action, and non-fiction genres. He has voiced many romantic leads, dark, anti-hero characters, male and female voices, and mafia-style characters as well. Making characters come to life through voice acting is his passion.

He is a native Texan and lives in Fort Worth with his 9-year-old Golden Retriever Crocket, like Davy from the Alamo. Yes, he does wear a cowboy hat and boots. No, he doesn’t ride his horse to the grocery store.