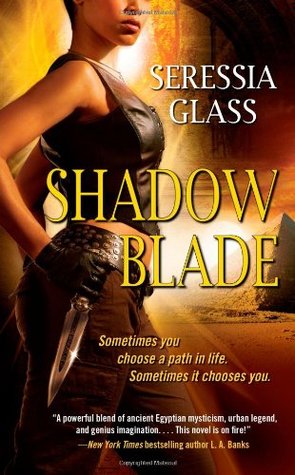 Kira is a Shadowchaser, a human with extrasensory powers and paramilitary training. She is part of an organization of Light that helps maintain balance with Shadow. As a side job, she is an antiquities expert who works with her mentor by using her gifts to determine if an object is a fake or possesses magic. When Bernie’s latest acquisition draws the attention of an immortal warrior and an Avatar of a Fallen, Kira finds herself in a deadly battle and unsure who to trust.

Shadow Blade is the first book in the urban fantasy Shadowchasers series. The author does a good job of introducing readers to this unique world that is loosely based on Egyptian mythology. I like that the author tosses the reader into the mix, introducing important aspects and characters over time; showing rather than telling.

Unlike most UF I’ve read, Shadow Blade is shared via alternating third person POVs. While it is primarily Kira’s tale, we also are privy to Khefar’s POV; he is the 4,000-year-old warrior and owner of the mysterious blade. I liked knowing right from the start his true intentions and his drive to protect Kira, while also experiencing Kira’s uncertainty to trust Khefar.

Shadow Blade is a great start to this Egyptian-mythology based UF. The author does a wonderful job introducing the components and main characters. I really love supporting character, Nansee. The main characters are strong but flawed, just as all great UF characters should be. The story moves quickly, and at a good pace. Overall, the story is interesting. The climatic battle is pretty good; I could have used a little more, but it was exciting and dangerous. The book definitely hooked me, and I want to read the next one.

For Kira Solomon, normal was never an option.

Kira’s day job as an antiquities expert, but her true calling is as a Shadowchaser. Trained from youth to be one of the most lethal Chasers in existence, Kira serves the Gilead Commission dispatching the Fallen who sow discord and chaos. Of course, sometimes Gilead bureaucracy is as much a thorn in her side as anything the Fallen can muster against her. Right now, though, she’s got a bigger problem. Someone is turning the city of Atlanta upside-down in search of a four-millennia-old Egyptian dagger that just happens to have fallen into Kira’s hands.

Then there’s Khefar, the dagger’s true owner-a near-immortal 4000-year-old Nubian warrior who, Kira has to admit, looks pretty fine for his age. Joining forces is the only way to keep the weapon safe from the sinister Shadow force, but now Kira is in deep with someone who holds more secrets than she does, the one person who knows just how treacherous this fight is. Because every step closer to destroying the enemy is a step closer to losing herself to Shadow forever. . .