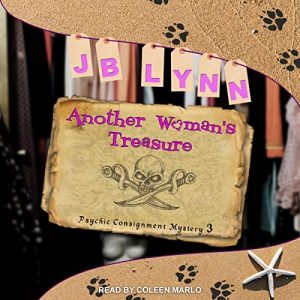 Picking up shortly after the conclusion of previous book, Another Woman’s Treasure wraps up the Concordia sisters’ look into what happened to their godmother, Aunt Letty. Although the story is shared via all three sister’s POVs, this one is primarily focused on Amanda who finds romance with Detective Tom. She also gains new aspects of her powers.

One of my favorite things about this cozy mystery series set in Sarasota, FL, is that the characters are all “real,” in that they aren’t perfect. They get overwhelmed, they have tempers, and they get frustrated. Sometimes they want to be left alone. They can be rude to the point of shocking. But in the end, they realize that they love one another and want to be together. Another Woman’s Treasure highlights the importance of family and how far the sisters have come since arriving at One Woman’s Junk.

The sisters continue to search for answers regarding Aunt Letty’s death. They have been uncovering clues, but they don’t know how to tie them all together. However, as some of the primary suspects die, the sisters begin to worry they’ll never find out the truth. It is a pretty good mystery and storyline, although it did get a little convoluted at one point. The author does tie in all the loose ends, making it clear what happened and why.

Additionally, the sisters’ powers continue to evolve and grow. I’m still a bit baffled as to why Bea’s power of talking with inanimate objects now belongs to everyone (or how it can even happen), but that none of the other powers are jointly shared. The women also learn more about their own past and what brought them together. I love how they continue to struggle with their relationship, yet are determined to make it work.

Narration: The story is shared via all three sister’s third-person POVs. The narrator remains the same for all POV’s: calm, feminine, and slightly on the deeper side. Ms. Marlo alters all dialogue appropriately for gender and age, even giving the Scottish Sea Monster a slight brogue. Each sister has a unique voice, as do the supporting characters and voices of the inanimate objects. Overall, Ms. Marlo makes the story easy to listen to.

While the Letty story was wrapped up, there are still some outstanding issues that need to be resolved. This series is entertaining and I look forward to see what comes next for the Concordia sisters.

The psychic powers of the Concordia sisters are increasing, but so is the body count…

(You’d think this was Cabot Cove or Midsomer instead of Sarasota, FL.)

Amanda and her sisters are on the hunt for a treasure buried by their godmother, Letty.

A moody ghost, their quirky fellow shop owners, and an overworked police detective all play a part in them unraveling the mysteries of Letty’s life and untimely death.

But can Amanda keep her family safe as they barrel, like a bull in a consignment shop, toward a showdown with the person responsible for Letty’s murder?