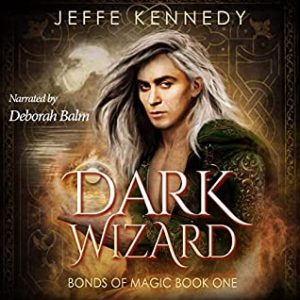 Gabriel is a Wizard. Lady Veronica is a Familiar. Their respective houses are part of the Convocation, although his is not in good standing. In order to restore his home and lands, Gabriel plans to win the betrothal competition to make Veronica his bride and Familiar.

Dark Wizard is the first in a dark fantasy romance trilogy by Jeffe Kennedy. The author does a wonderful job creating a magical world where Wizards outrank all others, and they have the ability to enslave a class of magical persons known as Familiars. Familiars are used to amplify a Wizard’s powers. Although this is the first book in a trilogy, the author gives our couple an HFN, and readers are aware that there are many trials ahead for the pair.

Dark Wizard is an engrossing story right from the get go. I enjoyed learning this new world and their archaic laws. The world feels familiar in its fantasy setting, but it’s got some new twists. The magic itself isn’t explained, but just is how it is. However, the magic system has all sorts of rules with the powerful oppressing the less powerful. I love how the author lays out bits and pieces about the world and the politics of the Convocation as the story progresses.

I adore Nic and Gabriel. He is so clueless, he just wants what is best and fair. Nic has been jaded by living in the Convocation and cannot believe that Gabriel is honest about his intentions. I like how both want more from their circumstances and come to an uneasy alliance. I also appreciate that Gabriel and Nic seem to be a destined match. I like that it takes time for the trust to develop, and for Gabriel there will always be a bit of uncertainty. It will be interesting to see how their love grows.

Narration: New-to-me narrator Deborah Balm does a wonderful job. The story is shared via the alternating third person POVs of Gabriel and Veronica. Using a British accent, she narrates the entire story with a deepish and slightly raspy voice. Overall, her performance is soothing and easy to listen to. Giving a partially-voiced reading, she adjusts the dialogue for most characters, albeit just enough to know different characters are speaking. She tends to be a little higher pitched for females, and softer and lower for males. She adjusts appropriately for mood and emotion, especially with Nic.

In the end, I thoroughly enjoyed listening to Dark Wizard and eagerly await the release of the second story, Bright Familiar, in audiobook format.

Lord Gabriel Phel wants one thing: to restore his shattered House to its former station in the Convocation’s complex and arcane society. Fortunately, through a wild chance of birth, he was born with the magic of a powerful wizard, the first in his family in generations. If he can obtain a familiar to supplement his skills, ideally one who is a highborn daughter who can also be his lady wife, then he’ll be that much closer to restoring House Phel. And to exacting his ultimate revenge on the Convocation that destroyed his family.

Lady Veronica Elal doesn’t have many choices. To her bitter disappointment, she will never be the powerful wizard she and her father hoped she’d be. Instead Nic is doomed to be a familiar like her mother, a second-class citizen in the Convocation, and one destined to be bonded to a wizard, serving his purposes for the rest of her life. Her one hope lies in entering the Betrothal Trials—and choosing a wizard from the Convocation candidates that she can manipulate. Whichever one of her suitors impregnates her will claim her as familiar and wife, and she can use her wiles to rule her wizard master, and the House she marries into.

But Gabriel throws a wrench into Nic’s careful scheming, by seducing and fascinating her. When she finds she’s pregnant by the rogue wizard she can never hope to control, Nic does the unthinkable: she runs.