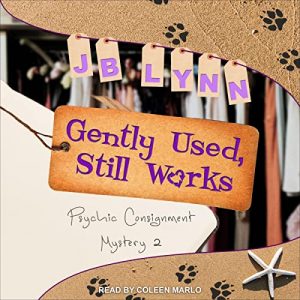 Picking up shortly after the conclusion of the first book in the Psychic Consignment Mystery series, Gently Used, Still Works continues the story of the three Concordia sisters and their quest to discover what happened to their godmother, Aunt Letty. While each book is shared via all three sisters’ POVs, this time around the primary focus is on middle sister, Winnie. She doesn’t necessarily believe in the psychic gifts that Amanda and Bea have developed, and she is more focused on making sure the landlord doesn’t kick out the tenants of their building and finding who killed Letty.

This is the second story in an interesting cozy series with some series-arching mysteries. I enjoyed getting to know the three sisters more. I like that they have flaws and don’t have it all together. They are working on themselves, working on rebuilding their lives, learning to trust and grow, reestablishing their strained relationship, and building a new home, together. I admit I don’t necessarily like the sisters all the time, but as I get to know them, I find their flaws and bad attitudes just one facet of their personas. Couple this with multiple overlapping mysteries, and it’s a recipe for a good story.

The sisters are making friends with the locals, and it’s Winnie’s turn for romance as sparks fly with neighboring accountant, Jim. There are a few tense and dangerous moments as the sisters get closer to discovering who killed their aunt. Their powers begin to morph and solidify, and as they do, the sisters seem to be growing closer.

Narration: The story is shared via all three sister’s third-person POVs, with the majority coming from Winnie. The narrator remains the same for all POV’s: calm, feminine, and slightly on the deeper side. Ms. Marlo alters all dialogue appropriately for gender and age, with each voice unique enough to identify. Each sister has a unique voice, but I don’t recall if they are the same as the first book. I felt that Bea (who was the primary character in book 1) sounded a bit more childish this time. Her males voices are deeper and well-performed, and the voice of the little sheep toy is higher-pitched and well-suited for the character. Overall, Ms. Marlo makes the story easy to listen to.

In the end, Gently Used, Still Works is another solid story. I really enjoy the mix of personal discovery and relationship building with the mystery and adventure. There is the larger mystery of what happened to Letty, coupled with smaller mysteries and personal character development.

Are the Concordia sisters about to get burned?

Running One Woman’s Junk consignment shop, with its constant stream of quirky characters stopping in, is a lot for Winnie and her sisters Bea and Amanda to contend with. So is dealing with each other.

Are their psychic powers a curse or a gift?

Wrestling with the psychic compulsion to sketch people and things she’s never even seen, Winnie goes head-to-head with the fire inspector who wants to shut down the store. And that’s before she stumbles into an arson case and finds herself cozying up to a hot neighbor who leads a secret life of his own.

Will Winnie and her sisters discover who killed their beloved godmother, or will their new life go up in flames?