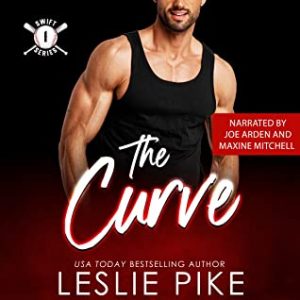 Atticus is a player in more than one way: he’s the star catcher for the Memphis Mavericks and he always gets attention from the ladies. When he sees Charlotte at a fan event, he knows he wants her. But Charlotte doesn’t fall for his moves, she’s a single mom of a teen and doesn’t have time for some fling.

The Curve is a sweet romance that moves quickly, but gives listeners all the feels. Atticus and Charlotte share a strong attraction as well as some common interests, other than baseball. The pair develops a friendship, and it’s Charolette’s daughter who helps bring the pair together because of her blossoming friendship with Atticus and his family. At first I was put off by Atticus’s aggressiveness and player attitude, but he won me over quickly because it is evident that he is truly interested in Charlotte as a person, including caring about her daughter.

It seemed evident from the start that Charlotte’s daughter would also provide the conflict for the relationship. Mallory has significant facial scarring, and kids can be cruel. Luckily, Atticus and Charlotte work together and through the conflict towards their HEA. I enjoyed Mallory’s story, but was thrown off by one small detail. Mallory, like many teens, wants social media; however, her choice of Facebook and Twitter are NOT what teens use. Kids are on Instagram, TikTok, and Snapchat…

Narration: The story is shared via the alternating first person POVs of Charlotte and Atticus, with M Mitchell (MM) narrating Charolette’s POV and J Arden (JA) narrating Atticus’s POV. MM has strong voice, slightly deep and confident. MM infuses her performance with the weariness of being a single mom of a 13 YO. She also does a great job with Mallory… pitching the voice higher and sounding like a teen. MM pitches her voice lower voice for males and does a very good job sounding like a cast of many. JA has pleasant neutral narrator/Atticus voice which is easy to listen to. He moderately alters dialogue for gender and age. While is females are slightly higher pitched, they aren’t overly distinguishable, and I really wasn’t a fan.

In the end, The Curve was an enjoyable listen. Atticus and Charlotte’s romance is quick, but not simple. I enjoyed watching them get to know one another. I also appreciate that Mallory isn’t just a background character who shows up randomly, but rather an integral piece of the story.

My Ratings
Story: B
Narration:
Joe Arden: B-
Maxine Mitchell: B+

When life throws you a curveball…you catch it.

Memphis Mavericks catcher Atticus Swift has game. On the field and off, he’s in demand. But he’s never been able to find someone who hooked him. Until Charlotte.

Single mother Charlotte Bay’s life is dedicated to her daughter, Mallory, who’s scarred physically and emotionally. Dreams of love and romance have had to be put aside to concentrate on raising a happy, confident young woman.

Can Charlotte let down her guard and accept that Atticus is looking for more than a one-hitter? Or will their back and forth leave them both on the outs?