Audiobook review: To Kill a God by C.S. Wilde 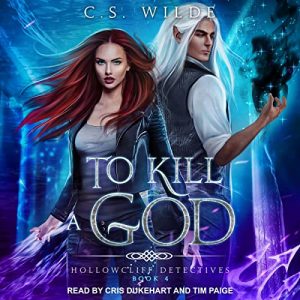 To Kill a God opens a few weeks after the conclusion of the third book in the series. Mera wants to warn Atlantia about Poseidon; however, it is illegal to make contact with the Sirens. Although Bast and Mera plan to go without the blessing of the ruling council, Poseidon attacks Tagrad, and Mera is captured.

To Kill a God is the final (?) book in the Hollowcliff Detectives series. The series has an overarching plot and should be read in order. This review will have spoilers from earlier books. To Kill a God wraps up all of the outstanding plots, most notably the plot involving Poseidon’s attempts to take over the world. I enjoyed how it concluded; however, I felt the book did drag on a bit too long and the concluding battle scene was over the top.

The story is full of action and adventure – more than any of the previous books. The primary focus is on stopping Poseidon, and I missed the general police procedural parts from the previous three books. To Kill a God also left out some of the characters that were key in those earlier titles, and Mera’s siren half appears to be gone or forgotten.

I do love that we finally get to see Atlantia, meet those who were important to Mera in her youth, and learn more about Mera’s history. The people under the sea have developed marvelous technology that is far different from what’s on land, and somewhat feels like there is no way that much change could have happened so quickly (about 2,000 years I think).

Narration: The story is shared via the third person POVs of Mera and Bast. Ms. Dukehart does a good job representing Mera, capturing her drive and emotions. Ms. Dukehart changes tone and voice for dialogue, making it appropriately deeper for males. I didn’t notice a huge difference between characters of the same gender, but enough for distinction and to keep it interesting. Mr. Paige performs the sections shared from Bast’s POV. His tone, speed, and cadence are fitting. However, his performance is very dramatic… he infuses a lot of emotion into the characters, but it’s a bit over the top. It makes Bast almost appear to be whiny, which he isn’t. Additionally, I am not a fan of his voices for female characters. They are lighter and more feminine (or childish), but almost to the point of being shrill.

To Kill a God is a fitting end for this urban fantasy romance series. Overall, I enjoyed the series and recommend it to fans of urban fantasy, magic, and mysteries.

My Ratings
Story: B-
Narration:
Dukehart: B
Paige: C

How do you kill someone who cannot die?

The wrath of Poseidon is falling upon land and sea. In Mera’s search for a way to destroy him, she returns to the kingdom she once abandoned. Atlantea.

The stakes have never been higher, and the fall has never been steeper. Poseidon is here. And it’s time to end it all.

To Kill A God is the gripping series finale of the Hollowcliff Detectives series, a fast-paced urban fantasy series with non-stop action and a forbidden romance between two partners.

The dead are rising. And Poseidon is coming.