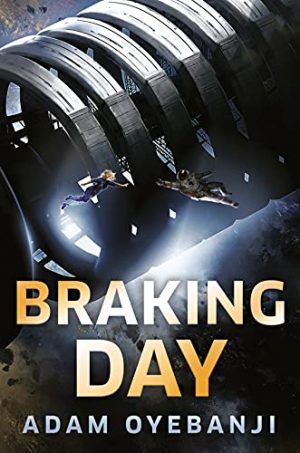 Braking Day, thoughtful debut offering by Adam Oyebanji, begins in the sixth generation of a seven-generation trip through space. The seventh generation are currently infants and toddlers. For genealogical purposes, a generation is typically defined as twenty years. That means that it’s been over 120 years since three massive ships left Earth to colonize a planet orbiting the star Tau Ceti, traveling at roughly ten-percent of the speed of light. By necessity, travel time would be extended to include time to accelerate and time to decelerate. The title Braking Day refers to the moment, or “sol” since days aren’t really a thing in deep space, when the ships will start the yearlong deceleration process prior to reaching their destination. The ships will then be broken down into resources to create new cities for their new lives. There is no going back.

The ancestors of the current crew had a dream for their mission, to escape the oppression of “LOKI’s,” an anacronym for Loosely Organized Kinetic Intelligence. As mankind became more and more dependent on technology, artificial intelligence gained more and more power. Somewhere between The Matrix and I, Robot, LOKI’s have become mankind’s babysitters, determining which activities have acceptable levels of risk and which do not. They effectively run the world. First crew wanted to make their own choices and for their children to also have that right.

Main character Ravi McCleod is an engineer in-training. His life is marked by a depth of thought on Oyebanji’s part which surprised me. It would have been easy to make these self-maintaining ships given the level of technology represented on Earth when they were built, but by leaving the LOKI’s behind, they require maintenance, repairs, experience the wear of decades of travel, even some catastrophes that cannot ever be repaired. Resources and water are limited. No one living even remembers Earth or “First Crew.” Their society has evolved to adapt to space living. Not everyone wants to give that up to live a stationary life on a rock and not everyone is productive. All crew members and passengers have a rating. “Dead weight” gets recycled because they cannot afford to waste resources on people who are disruptive or not contributing. Ravi’s father, the descendant of blue-collar workers, was a petty criminal by Earth’s standards, but was a problem to the wrong people. He was recycled and even though Ravi is an excellent student, he carries that stigma.

Despite whatever their intentions were when they left Earth, the first crew brought their prejudice and bad habits with them. Those descended from the revered officers of first crew have advantage, easy access to education, and opportunities. Those descended from blue-collar workers like janitors, warehouse workers, and food service, are barely scraping by. There are days that Ravi has to decide if he can afford to buy water to shower after dirty days crawling around the bowels of the ship. His professors doubt his intelligence and openly call his integrity into question in front of other students. No one even questions this prejudice.

Oyebanji crafts a believable world, not just with classism and environment, but has thought about life on these ships down to swear words, inter-ship sports teams, traditions, holidays, and the things people would organize to protest about six generations into the voyage. This believability makes what happens to Ravi so notable—he sees a girl floating outside the ship in the hard vacuum of space with no suit. A complete and total impossibility. We struggle with him while he evaluates his own sanity and enlists the help of his cousin, brilliant and gifted at coding, someone who should be in the upper echelons of the crew, but who keeps getting her rating knocked down for proudly following the family tradition of misdemeanor crimes.

The adventure that follows in the last third of the book is excellent. The reader does not see it coming even though the clues are there and that’s just fun. I truly hope that Oyebanji will make this a series. Braking Day is a complete book with a solid ending, but there is so much material to be explored that I would definitely be interested to see which way he takes these characters after their experiences.

It’s been over a century since three generation ships escaped an Earth dominated by artificial intelligence in pursuit of a life on a distant planet orbiting Tau Ceti. Now, it’s nearly Braking Day, when the ships will begin their long-awaited descent to their new home.

Born on the lower decks of the Archimedes, Ravi Macleod is an engineer-in-training, set to be the first of his family to become an officer in the stratified hierarchy aboard the ship. While on a routine inspection, Ravi sees the impossible: a young woman floating, helmetless, out in space. And he’s the only one who can see her.

As his visions of the girl grow more frequent, Ravi is faced with a choice: secure his family’s place among the elite members of Archimedes’ crew or risk it all by pursuing the mystery of the floating girl.  With the help of his cousin, Boz, and her illegally constructed AI, Ravi must investigate the source of these strange visions and uncovers the truth of the Archimedes’ departure from Earth before Braking Day arrives and changes everything about life as they know it.