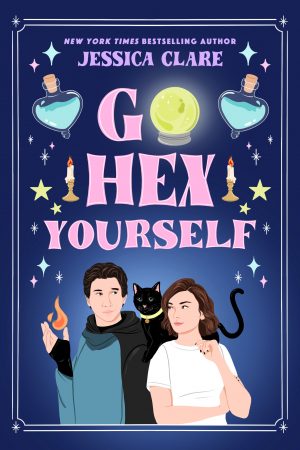 When Reggie answers a help wanted ad from the paper, she never expects that magic is real and that she’d be learning to help cast spells. While her boss, Dru, is a bit eccentric, Reggie comes to enjoy her job, even if it means she has to spend time with Dru’s grumpy (but handsome) nephew, Ben.

Ben has a monstrous reputation among his fellow wizards, and he fosters their negative image so that they’ll stay away from him. When he meets the wildly inexperienced Reggie, he wants his aunt to toss her out, but the more time Ben spends with Reggie, the more he wants to be with her.

Go Hex Yourself is an utterly delightful, simply fun romantic comedy. The whole set up is hilarious right from the get go, as Reggie believes her employer to be odd and delusional. There are lots of fun one-liners such as when Dru is trying to keep Reggie around by pretending magic doesn’t exist:

The silly quips and fun banter make the story easy to get into and a quick read. I found myself chuckling out loud several times.

Ben and Reggie are so good together. Both carry a lot of baggage, especially surrounding their parents. This gives them the ability to relate and understand each other in ways no other has been able to. Their relationship comes in starts and stops because trust is difficult, and they come from two different worlds. I love that even after one or the other blows up or runs away, that they realize they may have overreacted and work to set things straight. And I adore that the other is always there to listen and forgive.

When it appears that someone is cursing those in Dru’s household, Ben wants to protect Reggie, which means keeping her by his side – forced proximity for the win! I love how the pair works together to figure out who is behind the attacks. I adore how the young and innocent Reggie wants to protect Ben’s heart from those who ridicule him. The mystery is good; however, I guessed right from the get-go the “who” and “why.” But I didn’t mind, because it is the journey bringing them together that is the best part of the book.

In the end, I adored Go Hex Yourself, and I really hope the author brings us more stories from this world (she does a good job of a set up for book 2). The book is so much fun and highly entertaining.

When Reggie Johnson answers a job ad in the paper, she’s astonished to find that she’s not applying to work at her favorite card game, Spellcraft: The Magicking. Instead, she’s applying to be an actual familiar for an actual witch. As in, real magic.

The new job has a few perks – great room and board, excellent pay, and she’s apprenticing to a powerful witch. Sure, the witch is a bit eccentric. And sure, there was that issue with the black cat Reggie would prefer to forget about. The biggest problem, however, is warlock Ben Magnus, her employer’s nephew and the most arrogant, insufferable, maddening man to ever cast a spell.

Reggie absolutely hates him. He’s handsome, but he’s also bossy and irritating and orders her around. Ben’s butt might look great in a crystal ball vision, but that’s as far as it goes. But when someone with a vendetta targets the household, she finds herself working with Ben to break a deadly curse. Apparently, when they’re not fighting like cats and dogs, things get downright…bewitching.