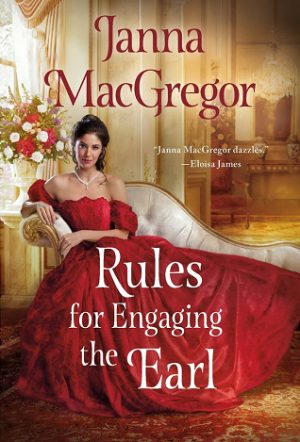 Rules for Engaging the Earl is the second book in the delightful Widow Rules series that features three women who were all married to the same scoundrel, at the same time! Constance is the second widow of Lord Meriwether; however, in the previous book the group discovered that first marriage wasn’t legal and never consummated, so Constance is the actual widow. While that may make her unborn child legitimate, she still has no money and no father for her baby.

Jonathan, Earl of Sykeston, and Constance were best friends growing up, but after his time away with the military and his permanent disability, Jonathan has secluded himself from the world. When Constance asks that he marry her, he cannot say no, but he plans to keep her far away in order to protect her from his past and a dismal future.

Rules for Engaging the Earl is a delightful friends-to-lovers romance. The story is a journey of healing both physical and emotional scars. Jonathan and Constance both hold heavy burdens in their hearts. She was married to the wrong man who brings shame to her and her baby. He is physically injured and worries about a court-marshal. Together they find the strength to forgive themselves and heal. I enjoyed watching the pair grow close, especially when they would make mistakes and have to rebuilding some of their trust. It helps that they knew each other long before and were once so close.

I love that we continue to see the support of the found-family of the three widows; how they love one another and continue to help each other. I enjoyed seeing the group get closer to solving the mystery of what did Meriwether did with their dowries.

In the end, Rules for Engaging the Earl is a fun story. I enjoyed just sitting back and taking it in. I loved seeing the romance develop and watching the pair heal from their scars.

My Rating: B+ liked it a lot

Constance Lysander needs a husband. Or, so society says. She’s about to give birth to her late husband’s child―a man who left her with zero money, and two other wives she didn’t know about. Thankfully, she has her Aunt by her side, and the two other wives have become close friends. But still―with a baby on the way, her shipping business to run, and an enemy skulking about, she has no time to find the perfect match.

Enter Jonathan, Earl of Sykeston. Returned war hero and Constance’s childhood best friend, his reentry into society has been harsh. Maligned for an injury he received in the line of duty, Jonathan prefers to stay out of sight. It’s the only way to keep his heart from completely crumbling. But when a missive from Constance requests his presence―to their marriage ceremony―Jonathan is on board. His feelings for Constance run deep, and he’ll do anything to make her happy, though it means risking his already bruised heart.

With Constance, Jonathan, and the new baby all together, it’s clear the wounds―both on the surface and in their relationship―run deep. But when the nights come, their wounds begin to heal, and both come to realize that their marriage of convenience is so much more than just a bargain.

Reviews in the Series:
A Duke in Time by Janna MacGregor (The Widow’s Rule #1)