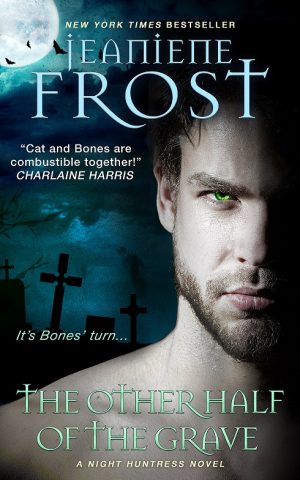 The Other Half of the Grave
Author: Jeaniene Frost
Reviewer: Jennifer
Rating: A+

The Night Huntress series is one of my all time favorite series in the PNR/UF genre. I’ve read the first 4 books at least three times, and when I saw Frost was writing from Bones’ POV I knew I had to read it.

The Other Half of the Grave was so good! Yes it’s the “same story” as Halfway to the Grave but it’s different because you get to feel what Bones was feeling and hear what he was thinking. After all, every story has two sides.

In Halfway to the Grave we see the story unfold through Cat’s eyes. She young (22) and naive in many ways. She’s only had one other lover and that was a horrible one night experience with a guy who she thought cared for her. Sure she knows about vampires since she’s half but her mum has poisoned her against them and in turn made her hate herself. So it’s natural that she would be unsure of her feelings for Bones and think there was no way he would care for her. Bones in Cat’s eyes came off as this cocky, sexy Brit, full of himself and must have had tons of lovers.

In The Other Half of the Grave we get to see Bones is just as insecure about Cat’s feelings about him as she was in her version of their story. Bones is 200+ years old, he should be cocky and self aware, right? Like Cat, he’s never been in love and never thought he would be. But here comes along Cat, a woman much too young for him (LOL) and she grabs him by Lucifer’s Bouncing Balls from the first night they meet, with her trying to kill him.

If you’re a fan of the Night Huntress series then you know that Bones is mad in love with Cat and she him. So it was fun, sweet, and heartbreaking to experience the being of their love story through his eyes. We also get to see somethings through scenes when Cat is not around. While we wondered what he was doing in Halfway to the Grave, we now know and how he was feeling during some of the scenes with Cat. We could see they were falling in love with each other but we (like Cat) didn’t know he was in love with her from the every being.

The Other Half of the Grave is a MUST read for fans and if you have never started the series it’s a great way to jump into the world. I plan on rereading it in tandem with Halfway to the Grave in the very near future.

My Rating: A+, Personal Favorite

There are two sides to every story–and the sizzling British alpha vampire, Bones, has a lot to say…

Ever wondered what Bones was thinking and feeling when he and half-vampire Cat Crawfield first met? Or how their story might differ if he were the one telling it? Now, relive the beginning of Cat and Bones’ bestselling love story through Bones’ point of view, which reveals a darker, sexier take on their early days, as well as a deeper dive into Bones’ past, the vampire world, and other things that Cat didn’t see when their story was told only through her eyes in Halfway to the Grave.