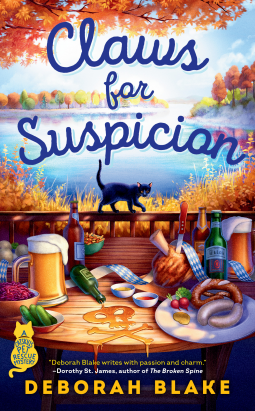 “You may want to rethink that anniversary thing,” Charlie said, a hint of smugness in his smooth tone. “Because it turns out, we’re still married.”

Kari’s legs turned to jelly and she sank into her chair before they gave out on her. This had to be a bad joke, right?

“What the heck are you talking about, Charlie Smith?” she asked. “We stood in a courtroom together and a judge accepted the terms of the divorce. Which if you’ll recall, were mostly in your favor. There is no way we are still married.”

“The divorce wasn’t official until we both signed the paperwork and mailed it back in to the county clerk’s office,” Charlie said. “And apparently you never did that. I checked, and there is no record of our divorce being finalized and officially filed. We’re married, all right.”

Kari swallowed hard around the lump in her throat. Of course she had sent in the papers. Hadn’t she? It was four years ago, and once everything was done with, she’d tried to put it as far behind her as possible.

The kitten jumped out of her arms and nudged at a piece of paper, as if trying to make a point. Over the last few months, Kari had figured out not to ignore her hints.

“Charlie,” Kari said in a carefully neutral tone, “Why would you have checked on that, after all this time? Are you planning on getting remarried?” She had been his second wife, twenty-two to his thirty-three at the time, and he’d never been one to be without a woman. Or a few women.

He threw back his head and laughed, making everyone in the place turn around for a moment and stare. His laugh always seemed genuinely charming, just like the rest of him. “Not at the moment,” he said. “And it turns out that’s a good thing, since I’m already hitched to you.”

He straightened the crease on his perfectly pressed pants. “No, I decided to double check with my lawyer when I heard your good news. Just in case I was entitled to something. He was the one who found out the paperwork had never been properly filed.”

Kari’s heart sank into her sneakers. She was pretty sure she knew which good news Charlie meant. “The good news about my buying the sanctuary?” she said.

“Don’t be silly, Dumpling,” he responded, using the nickname she’d always hated. It sounded affectionate, but it had been his subtle dig at the extra ten pounds she constantly seemed to be battling. Charlie specialized in the art of the understated putdown. Too bad it had taken her so long to figure out how damaging that was. “I mean your good luck, winning all that money in the lottery. Congratulations, by the way. Well done.”

“Thank you,” she said. “Ironically, I bought the ticket when I stopped at the convenience store on the way home from work so I could pick up cat litter. So if you think about it, if we had been together, I never would have won at all. And you do realize that the payout isn’t nearly as big as the original prize. After taxes, and with the penalties for taking it all at once, there was only about five million dollars.”

“A respectable sum,” he said. “My lawyer says that since we’re still legally married, I’m entitled to half.”

“That’s ridiculous!” Kari said, trying not to panic. “We haven’t even seen each other in four years. We are supposed to be divorced. Besides, I’ve already sunk a lot of my winnings into buying and rehabbing the sanctuary.”

“No problem,” Charlie said with a smirk. “I’ll take that. The land isn’t worth much, but I’m sure I can do something with it.”

Kari stood up again, aware that their discussion was now the center of attention from everyone in the room. She didn’t have the energy to care. “Let me say this very clearly, so there is no confusion,” she said through clenched teeth. “You will get this sanctuary over my dead body.” She glared at him. “Or if necessary, yours.”

Charlie just laughed at her and rose from his perch. “My same old feisty little Dumpling, I see. I’ll go now and give you a little time to adjust to the idea. I’m sure you’ll see reason in the end.”

He blew her a kiss and strolled out the door, leaving both Kari’s desk and her peace of mind a lot more disturbed than when he’d arrived.

From CLAWS FOR SUSPICION published by arrangement with Berkley, an imprint of Penguin Random House LLC. Copyright © 2022 by Deborah Blake.

When someone from her past comes to town to cause trouble, Kari Stuart and her sassy kitten Queenie will have to work hard to protect the Serenity Sanctuary in this new Catskills Pet Rescue Mystery.

Kari Stuart is finally starting to relax into her role as the new owner of the Serenity Sanctuary and is looking forward to the various fun autumn activities in the beautiful Catskills town of Lakeview, like the annual Oktoberfest celebration. It’s time for friends and quality bonding with handsome vet Angus McCoy. Until the unexpected arrival of her unpleasant ex-husband, Charlie Smith.

He comes bearing a shocking revelation—the paperwork on their divorce never went through, and they are still married. Worse yet, he thinks this entitles him to half of her lottery winnings—although he’ll happily take partial ownership of the sanctuary instead. Kari isn’t sure if he’s telling the truth, or if it’s just another one of Charlie’s lies.

But things go from bad to worse when an unexpected death makes Kari the main suspect in a murder investigation. Will she and Queenie be able to find the real killer and keep the home they’ve built at the sanctuary safe, or is their string of luck finally tapped out?

Deborah Blake is the author of multiple romance series, including the Baba Yaga series, as well as over a dozen nonfiction titles. When not writing, Deborah runs the Artisans’ Guild, a cooperative shop she founded with a friend in 1999, and also works as a jewelry maker, tarot reader, and energy healer. She lives in a 130-year-old farmhouse in rural upstate New York with numerous cats who supervise all her activities, both magical and mundane. Learn more online at deborahblakeauthor.com, Facebook, and Twitter.