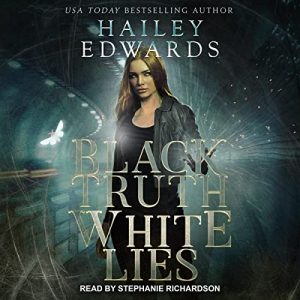 It’s the time between Thanksgiving and Christmas and Rue and the gang is enjoying some holiday downtime. However when an aquatic fae kills the town’s Christmas reindeer, the trio suspects someone is after Rue. Additionally, Aiden shows up to challenge Asa, but Rue, understanding his intent is to die to protect his siblings, convinces him to rest in safety.

Black Truth, White Lies is the third story in Ms. Edwards’ Black Hat Bureau series. I am enjoying the twist on a paranormal investigation unit, as the Bureau is filled with paranormals of questionable morals chasing down those even darker than they. Rue is a recovering Black Witch, trying to change her ways because of her foster child. With each story we understand more of what Rue went through growing up and how difficult it can be for her to withstand the pull of the black magic. The author has created a complex character, and I enjoy witnessing her moral struggles.

This time around, the story centers on Aiden’s fight with his family, as well as a mystery that gives Rue answers about her own heritage. The series is taking a turn towards the personal, with Rue caught in the center of unwanted attention. I really enjoy the addition of Aiden. It’s nice to see Rue learning to trust more and widening the circle of those she cares for.

Narration: The story is shared via first person POV of Rue. Ms. Richardson uses a strong, upbeat feminine voice for Rue/the narrator, which suits the character and storytelling. The narrator alters dialogue, giving some characters a unique voice, suited to the age, gender, species, etc. Some voices are immediately identifiable, like that for Clay, whose voice is deeper, slower, and large, just like him. As the series progresses I find that I’m not confusing voices/characters as much as I did earlier on. I enjoyed Colby, whose young voice sounds a bit cartoonish, which is perfect for the mythological friend.

In the end, I enjoyed Black Truth, White Lies. I am appreciative that there is forward momentum on Rue and Asa’s relationship, bringing acceptance and trust. I also like that Rue is learning more about her heritage, and I look forward to seeing how all of the changes impact Rue, her found-family, and her human friends.

My Ratings
Story: B
Narration: B+/B

When one of Santa’s reindeer meets a grisly end during the annual A Downtown Dickens Christmas Festival, Rue realizes her enemies are closing in on her location, and Samford will pay the price.

But when one creature turns into two, and two into three, and then three into four, Rue knows the problem is bigger than a singular threat to her new hometown. And that’s before a holiday shopper strolls into Hollis Apothecary claiming to be a long-lost relative. Of her father’s.

As old loyalties are tested and new relationships threaten to unravel the fabric of her identity, Rue must choose either the family she was born into or the one she created for herself, and the losing side might not survive her decision.