Audiobook review: Something Old, Something New by JB Lynn 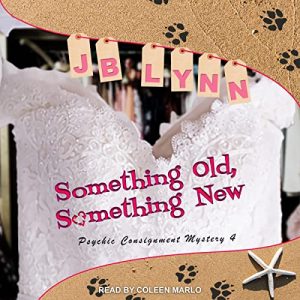 Picking up a short time after the conclusion of the previous book, Something Old, Something New opens with young Rena wanted for questioning by the police. Since the Concordia sisters are very protective of her, they find themselves involved in Rena’s situation right away. Additionally, Bea has a vision of a woman burning in a house fire, and Piper’s fiancee surprises everyone by coming home early.

Over the course of the first three books, I’ve come to enjoy the Concordia sisters, who reunited after their godmother Letty died. I liked watching them get to know themselves and each other, maturing as they evaluate their places in the world. While I appreciated their rough edges in the past, I found myself annoyed with their family dynamics this time around. They can be quick to judge one another, and often make poor assumptions that cause hurt feelings. And they hold grudges. I really did not like Amanda this time around. After three books, I would hope their relationship would have fewer bumps.

There is also a LOT going on in Something Old, Something New. Between working on cases and helping their friends, the story stretches in several directions. Some of the threads come together, but some are still loose ends without closure. I would have preferred a more focused storyline.

My biggest complaint is the convenient way powers seem to manifest to help the sisters. Why are some shared and others not? And what’s with a couple of inanimate objects interacting with the sisters and one another? It’s a bit creepy. Why some objects and not others? How is it Bea now sees the future? Additionally, something happens to Tom’s newly returned brother that continued to push the story beyond what I’m willing to accept. But the final straw was the magic they were able to use at the end… Again, it all feels haphazard yet convenient.

Narration: The story is shared via all three sister’s third-person POVs. The narrator remains the same for all POV’s: calm, feminine, and slightly on the deeper side. Ms. Marlo alters all dialogue appropriately for gender and age, even giving the Scottish Sea Monster a slight brogue. Each sister has a unique voice, as do the supporting characters and voices of the inanimate objects. Overall, Ms. Marlo makes the story easy to listen to.

In the end, I felt Something Old, Something New was okay. While I enjoy the overall story, I was annoyed by sisters’ family dynamics. I also didn’t like how their psychic powers seem to manifest without rhyme or reason.

My Ratings
Story: C+
Narration: B+

Love is in the salty sea air of Sarasota, Florida.

But so is murder.

The Concordia sisters, owners of the One Woman’s Junk consignment shop, are up to their eyeballs in trouble as they try to help their friends, solve a murder and plan a wedding. All while managing not to kill each other, offend any of their wacky clientele, or wreck their own love lives.