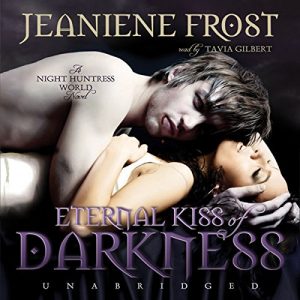 I am excited to participate in Anne’s read-along again this year. I listened to the Night Huntress books back circa 2015 and enjoyed them. Eternal Kiss of Darkness is one of two standalone romances that feature supporting characters and an HEA. I enjoyed my re-read tremendously, and found that my original thoughts on the book hold up.

Eternal Kiss of Darkness centers on Bones’s co-ruler and grandsire, the powerful Mencheres. In a previous book, we learned that Mencheres lost his ability to see visions of the future, but what we didn’t know until now, is that he sees the endless darkness of death. We also learn that Mencheres has been in a millennia-old feud with a fellow Egyptian vampire, who feels Mencheres received the gifts of power that should have been his. Tired of this feud and ready to end his life, Mencheres thinks the best thing for his people and Bones is to die, so he allows a group of ghouls to kill him. That is until Kira accidentally discovers the beat down and tries to save Mencheres. However, once it’s apparent that she’s seen too much and he can’t wipe her mind of the events, Mencheres must take Kira with him until he can figure out how to make her forget what she knows. What he doesn’t count on is feeling something for her – the first woman to effect him in nearly 3,000 years.

Right from the start I throughly enjoyed Eternal Kiss of Darkness. Kira is a wonderful character: smart, independent, kind, spunky, and everything I love about a PNR/UF heroine. Mencheres and Kira are a perfect match; she allows the kindness and generosity he long ago buried to shine. I love that from the start there is a strong mutual attraction; however, neither will act on it because he’s holding her captive. My only complaint is that the ending is very sudden and abrupt.

Narration: The story is shared via the alternating third person POVs of Kira and Mencheres. Ms. Gilbert uses a neutral female voice to narrate both POVs, altering dialogue for all characters. She utilizes a vast array of accents and tones to fit the multitude of vampire and human characters. She adjusts for age, gender, and background to create a cast of dozens. Her males are generally deeper and come across as if different actors are performing. My personal favorite is the heavily Romanian-accented Vlad, who sounds just as I imagine the famous vampire would speak. Additionally, Ms. Gilbert excels at inserting non-speaking sounds and conveying strong emotions in her narration.

In the end, Eternal Kiss of Darkness is a wonderful paranormal romance, full of drama, but not dramatic. I enjoyed the Egyptian mythology and learning more about the vampiric powers and politics. I’m so glad I took the time to re-read this fabulous story.

An immortal war has been brewing in the darkness … and now one woman has stumbled into the shadows.

Chicago private investigator Kira Graceling should have just kept on walking. But her sense of duty refused to let her ignore the moans of pain coming from inside a warehouse just before dawn. Suddenly she finds herself in a world she’s only imagined in her worst nightmares.

At the center is Mencheres, a breathtaking Master vampire who thought he’d seen it all. Then Kira appears—this fearless, beautiful human who braved death to rescue him. Though he burns for her, keeping Kira in his world means risking her life. Yet sending her away is unthinkable.

With danger closing in, Mencheres must choose either the woman he craves or embracing the darkest magic to defeat an enemy bent on his eternal destruction.