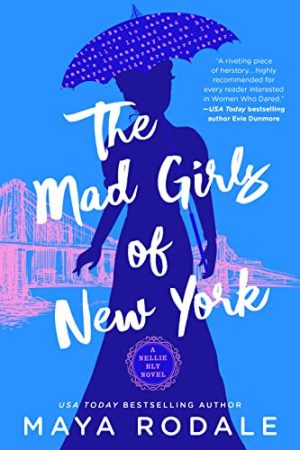 This novel was quite the journey for me, and like every journey it had ups and downs.

The characters are strongly written, the settings are gut-wrenchingly realistic, and once I was invested in the story it was gripping, much like Nellie Bly herself. Overall, the story is very interesting, and I was amazed to see how many things have and have not changed in reference to women, health care, and especially womens’ mental health, in the nearly one hundred and fifty years since Ms. Bly was a resident of Blackwell Island.

I do feel this novel needed a trigger warning, especially for those who have a history of abuse, difficult, abusive, or neglectful doctors, or being institutionalized for mental health issues because this novel dives deep into these difficult and dark issues.

Another issue I had with this novel was that it introduces an entire host of characters and then presents the novel from their points of view. This would be fine if it were only one or two, maybe even three points of view, but the novel is presented from so many viewpoints that I nearly stopped reading out of confusion; I simply couldn’t keep them straight. I am glad to report that about fifteen percent of the way into the story Ms. Rodel stuck with primarily two points of view, and I was able to follow things better.

My final issue with the novel was the way Ms. Rodel belabored the point that being a wife and mom is/was a punishment worse than Blackwell Island itself. Well maybe not quite that awful but a very close second. I understand that, especially in the time period of this novel, women were property with few to no choices and that many homes were filled with abuses of all kinds. However, the idea that caring for one’s family and home was such a horrific drudgery that should be avoided at any and all costs was repeated so many times by so many characters that I wanted to holler “OK I’VE GOT IT PUT THE BAT DOWN!!!!” I think there were better ways of getting the point across without sounding hateful towards what many women felt then and continue to feel now is a calling and privilege.

The above issues were strong enough for me that I did drop the overall grade of the book but not so difficult for me that it didn’t maintain a solid standing. Overall, the novel is very interesting. Nellie is as compelling in her fictional form as she is in her biographical form. Ms. Rodel took a bit of artistic license but stayed true to who Nellie was and what she worked so hard to accomplish, allowing her story to highlight the issues of the time and encouraging me to think and even study many of those issues and how they have changed or are being dealt with differently now. In so many ways, Nellie Bly lit a spark that ignited the torch many women continue to carry today as they fight for changes in a health care system that was made by men to treat men and wants to force women to fit into, especially in the area of mental health and wellness.

If you’re looking for a strong story with interesting characters that deals with topics that continue to be relevant, then I think you’ll enjoy The Mad Girls of New York.

In 1887 New York City, Nellie Bly has ambitions beyond writing for the ladies pages, but all the editors on Newspaper Row think women are too emotional, respectable and delicate to do the job. But then the New York World challenges her to an assignment she’d be mad to accept and mad to refuse: go undercover as a patient at Blackwell’s Island Insane Asylum for Women.

For months, rumors have been swirling about deplorable conditions at Blackwell’s, but no reporter can get in—that is, until Nellie feigns insanity, gets committed and attempts to survive ten days in the madhouse. Inside, she discovers horrors beyond comprehension. It’s an investigation that could make her career—if she can get out to tell it before two rival reporters scoop her story.