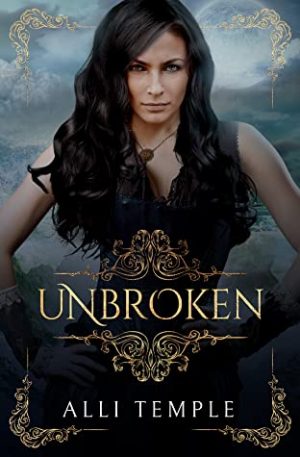 For years, the infamous Captain Cinder has known exactly who she is. Rejected daughter Mercenary for hire. Terror of the Seas. Respected by her crew. Nothing on the horizon save her next destination. She even got to defeat the bad guy and win the girl. On the whole, life was pretty good. But, now that she’s found love for the first time, she also knows what it feels like to have a real future to hope for—along with the fear of losing it. And trying to keep it might cost her everything.

Rather than using a word-for-word flashback as an introduction, Unbroken very simply, yet effectively, picks up just before the ending of the previous story, Uncharted—but from Lou’s point of view. From there, the narrative is as much an all-out adventure as anyone could wish, complete with espionage, duplicity, hidden treasure, sword fights, damsels in distress (well, not necessarily damsels, but a few characters are certainly in a great deal of distress), and ill-advised overnighters in houses of ill repute. A job well done!

As it turns out, Lou is kind of a mess. Having earned a healthy fear amongst her enemies along with the devotion of her entire crew, Lou had kept her heart safely locked away behind her existence as Captain Cinder for years—a benefit that was completely undone with arrival of Georgina, her childhood friend and loving partner. Now, Lou feels obligated to distance herself from “Captain Cinder” for George’s sake, unwilling to accept that she can’t separate herself from who she is. Lou can’t even honestly say she’s trying to change into someone else for Georgina, because George has always loved her as is—and Lou has no idea how to handle it.

One of the things I liked best about Unbroken was the return of all of my favorite characters. Although there are quite a few new additions to the cast (some likeable, some not), it was the more familiar faces who made this story a real pleasure to read. In addition to George, Rosie and Ender are back and are even more memorable that before, along with others of the crew that I remembered fondly. But, it was still Maro who made Unbroken as wonderful as it was for me, and I really can’t imagine this series without them.

When I read Uncharted, I wasn’t even sure there would be a sequel, so this story was very much an unexpected pleasure. Though the complications in Unbroken became increasingly varied and abundant as the narrative progressed, things tidied themselves up quickly for what turned out to be a highly satisfying ending. Given that I also just saw that a third novel in the series is in the works, I’m thoroughly invested, and looking forward to finding out what will happen next.

A pirate’s home is the sea, sailing beyond the horizon with her true love.

Aboard the Crimson Siren, Captain Cinder finally has the life she’s always dreamed of. Her freedom is restored, her crew is a trustworthy bunch, and the princess who holds her heart is by her side.

But trouble brewing back in Redmere threatens to pull Cinder and Princess Georgina apart before their future can truly begin. Georgina feels a responsibility to help, while Cinder is vehemently against returning to their former home. Instead, she embarks on a dangerous treasure hunt that could cost her everything. Facing deadly threat, Cinder pushes everyone around her away just when she needs them the most.

Friendships are tested. Risky alliances forged. Yet as storm clouds darken Cinder’s future, one thing becomes painfully clear: Her home is taking on water, and time to save the people she loves is running out.

Reviews in the Series:
Uncharted by Allison Temple (The Pirate & Her Princess #1)