Posted May 15, 2022 by Jen in Sunday Snippet Tags: Laura Greenwood 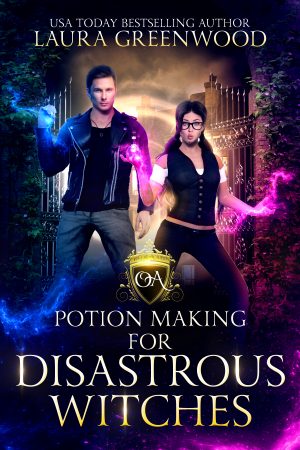 “So, are you often alone in the lab?” I didn’t know what to expect when I came here, but I think it was definitely more people.

“This is one of the practice labs they have set aside. People can come and go as they want, but it isn’t used for teaching. But I’m sure you know what students are like.”

I chuckle nervously and adjust my glasses. “I have a good idea, yes.”

“I hope not. I am too.” He uncaps the cumin bottle and gives it a couple of shakes over the potion.

It shimmers and the bad smell from before is replaced by something a lot sweeter and more palatable.

“Surprised?” he asks with an impish grin.

“A little. The way people were talking, it seems as if you’ve made a name for yourself already. I assumed you’d been here for years.”

“And not five months,” he finishes for me.

He hands the cumin pot back to me so I can return it to its shelf. “I get that a lot,” he admits. “But it just comes from already knowing what I want to do when I graduate.”

He raises an eyebrow. “No. But you can take as many guesses as you want to figure it out.”

“Wouldn’t it be easier if you just tell me?”

“Easier, yes. As fun? No, probably not, especially when we’ll be spending some time together while brewing the potion you want.”

“You can’t be that bad.” The disbelief in his voice is something I know well.

“All right, let me show you.” I pick up a miniature cauldron. “Put me some of that in here.”

“Okay…” He takes it from me and ladles out some of his potion while I set up a small bunsen burner on the workbench next to me.

I pause, realising how reckless it is for me to be doing this. “You have safety goggles, right?”

“Over on the door.” He points to where a few spare lab coats are also hanging. It’s probably a good idea to put one of those on too.

I hurry over and put on my safety gear, bringing some back for Owen too. The potion he’s making can’t be particularly dangerous if he’s not wearing any already, but I know what I’m like. 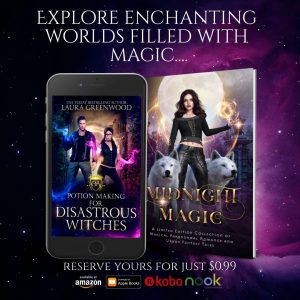 He sets the small cauldron on top of the tripod over my bunsen burner.

“You might want to cover your cauldron too,” I warn.

He eyes me warily, but flips a lever on the side of the cauldron so a lid snaps into place over it.

I hand him the protective gear.

“I’m really not sure this is necessary.”

“Oh, trust me it is,” I mutter. “What needs to go into the potion next?” I gesture to it, though I’m sure he already knows what I mean.

“Dandelion seeds. You’ll just need one for the amount you’ve got there,” he says.

I nod and turn back to the spice rack, searching for the dandelion seeds. Ah, there it is. I take it back to the workbench and pull open a drawer to look for tweezers so I can get out a single seed. I may not have been in this lab before, but the set-up seems fairly similar to the one I had at school.

“Is there anything I need to do or say when I drop it in?” I ask Owen. Some potions are more complicated than others.

He shakes his head. “Just add it.”

“Great.” At least that’s a little reassuring. There’s less that can go wrong if I do it that way.

I try not to pay attention to the way he’s so focused on me. Why did I think this was a good idea? I barely know him, it shouldn’t matter what he thinks of my potion making skills.

The cap on the dandelion bottle is a little stiff, but I manage to get it off without spilling any. I take the tweezers and carefully pull out one dandelion seed. It looks so small like this. How can that possibly cause a potion disaster?

It’s a question I should know better than to ask. I can cause a disaster with the simplest of ingredients, which is something Owen is about to find out.

I push the cap back onto the open bottle. The last thing I want is for the potion to blow up or bubble over and contaminate it somehow.

“I’m not even sure,” he responds, seeming warily amused.

I take a deep breath. It’s unusual for me to even attempt potion making, but here I’m doing it willingly in order to make a point.

I push the thought to the side and release my grip on the tweezers so the dandelion seed falls into the bubbling potion below.

For a moment, nothing happens, and relief threatens to consume me. Have I managed to break my bad potion streak?

As if summoned by my thoughts, the potion begins to bubble more viciously and turns an alarming shade of green.

I glance at Owen to ask if this is what it’s supposed to be doing, but the alarm on his face answers the question before I even ask it.

A large jet of potion spurts into the air. I squeeze my eyes shut and raise my arm as extra protection on reflex, only opening them again when nothing seems to happen.

The workbench in front of me is covered in green gloop, but that seems to be the only issue. I reach forward and shut off the gas supply to the Bunsen burner.

If there’s one thing Michaela is good at, it’s messing up potions and causing magical hiccups in the process.

And now she needs to make one or her friend will stay a slave to her curse.

Determined to get it right, she enlists the help of Owen, the best potion-brewing warlock at Obscure Academy.

As the sparks start to fly, the two discover they have more than just potion brewing skills in common.

Potion Making For Disastrous Witches is a light-hearted witch academy m/f romance set at Obscure Academy. It is Michaela and Owen’s complete story.

A free side story featuring Michaela’s gorgon best friend, Thalia, is available to download here: https://books.authorlauragreenwood.co.uk/nvren2j1ez (no sign up required)

Laura is a USA Today Bestselling Author of paranormal, fantasy, urban fantasy, and contemporary romance. When she’s not writing, she drinks a lot of tea, tries to resist French macarons, and works towards a diploma in Egyptology. She lives in the UK, where most of her books are set. Laura specialises in quick reads, whether you’re looking for a swoonworthy romance for the bath, or an action-packed adventure for your latest journey, you’ll find the perfect match amongst her books!