Tear Down the Throne 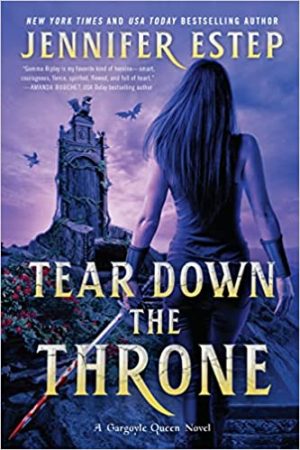 I whirled around. Several guards sprawled on the ground around Reiko. Some had died from the stab wounds she’d inflicted on them, while others were choking on their own blood and clutching their throats, which she’d torn open with her talons.

But one man had slipped past Reiko and was charging at me. He must have been a mutt with some speed magic because he closed the distance between us in the blink of an eye. I ducked his deadly swing and grabbed my dagger.

The man growled and charged at me again, but I stepped up, dodged his defenses, and buried my dagger in his stomach. He screamed, and I ripped the blade free, tearing out a good portion of his guts.

I started to shove him away, but he put his shoulder down and barreled into me. The attack took me by surprise, my feet flew out from under me, and I landed flat on my back, my head bouncing off the ground. Pain spiked through my skull, and I accidentally bit down on my own tongue, hard enough to draw blood.

“Gemma!” Reiko screamed again. “Get up!”

Another guard rushed at her, and she lashed out with her sword, driving him back.

I planted my hands on the ground and sat up. The guard that I’d gutted was looming over me, his face twisting with pain and anger.

My head was throbbing from my hard fall, and I couldn’t get a grip on my magic, so I dug my heels into the dirt, trying to scuttle backward. But I was moving too slowly, and he still had too much speed, despite his gruesome injury. The guard lurched forward, raised his sword high, and swung it down. I lifted my hand and grabbed onto the string of energy attached to his blade—

The sword stopped inches from my heart.

He growled and surged forward, trying to shove his sword past the invisible barrier of my magic, but I gritted my teeth, clenched my hand into a fist, and tightened my grip on his weapon. Pain pounded through my body, sweat dripped down my face, and blood filled my mouth, but I held on, my arm shaking from the effort.

“Give me that!” I heard Wexel yell.

Up on the ridge, the captain wrested a crossbow away from one of the injured archers. And that was all I saw before the man in front of me churned his feet again, still trying to force his way past my magic.

The guard must have had some strength power to go along with his speed because his sword lunged another inch closer to my heart.

I snarled with anger and frustration, but try as I might, I couldn’t hold him back, and it was only a matter of seconds before he punched his blade into my chest and killed me—

The guard flew across the clearing and slammed into the base of the ridge. Rocks tumbled to the ground, and so did the man, his spine snapped like a toothpick and his legs no longer lined up with the rest of his body.

My eyes widened in surprise. I hadn’t done that. A shadow fell over me, blotting out the sun, and my head snapped up.

A man was standing on top of the ridge to my right.

He looked to be a year or two older than me, thirty or so. His longish black hair was as shiny as polished onyx, the wavy layers ending in tips that reminded me of the sharp points on a strix’s feathers. His skin was tan, and he had a straight nose and sharp, angular cheekbones, along with those dark amethyst eyes that had haunted my dreams for weeks, months, years.

His black cloak fluttered around his tall, muscled body, pushed back and forth by the chilly breeze, and snapped around his legs like a coral viper lashing out at its prey. He was wearing a long black riding coat over a black tunic, leggings, and boots, and a tearstone sword and dagger dangled from his black leather belt. Silver buttons marched down the front of his coat, and the Morricone royal crest—that fancy cursive M surrounded by a ring of strix feathers—was done in silver thread over his heart, if he even had such a weak, treacherous organ.

As for my own heart, well, it quickened at the sight of him, betraying me yet again—just like he had.

Crown princess. Clever spy. Powerful mind magier. Gemma Ripley of Andvari is all those things—and determined to stop an enemy from using magical tearstone weapons to conquer her kingdom.

Gemma’s quest for answers leads her to a trade Summit between the various kingdoms. Among the other royals in attendance is Queen Maeven Morricone of Morta and her son, Prince Leonidas—Gemma’s charming and dangerous nemesis.

Gemma knows that Maeven always has a long game in motion, and sure enough, the cunning queen invokes an arcane tradition that threatens the fragile truce between Andvari and the other kingdoms. Despite her best intentions, Gemma once again finds herself thrown together with Leo and battling her growing feelings for the enemy prince.

When a series of deadly attacks shatters the Summit’s peaceful negotiations, Gemma realizes that someone wants to tear the royals down from their thrones—and that this enemy just might succeed.

Tear Down the Throne, book #2 in her Gargoyle Queen adult epic fantasy series, will be released May 3.

Jennifer is also the author of the Crown of Shards, Gargoyle Queen, Elemental Assassin, Section 47, and other fantasy series. She has written more than 40 books, along with numerous novellas and stories.