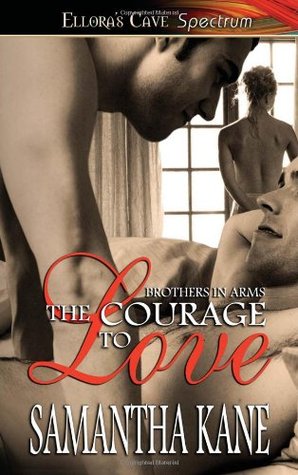 Since Kate’s husband died, she’s been the mistress of a few decent men; however the last one used her as fun for his gambling friends who raped her, and then he kicked her out. In the year since, she’s opened her own business to support herself and her young niece.

Tony and Jason return from the continent and war to find Kate a shell of the woman they fell in love with. Now that she’s free of the memory of her late husband and no longer “sowing her seeds,” they plan to make her theirs permanently.

Secondly, it’s not clear what period the story is set. At times, the language and actions feel too current for historical England. There is a lack of world development and setting details, and the story could easily be set in modern day as it could be the 1800s. There is no real context for the setting other than Tony and Jason fighting in a war on the continent, and a mention of carriages and candles.

My biggest issue is the underlying lack of romantic development. Kate was brutally abused. She’s fought for some normalcy in her life. Tony and Jason sweep in and press her into a sexual relationship. While she is open to it and enjoys it, there is no discussion about what happened, no time for her to learn to trust again. They just love her, and we are supposed to accept it.

But what what really put me over the edge was when her 16-year old niece, who is just find with her aunt getting it on with two men, runs off to offer herself to the local grocery to keep their account open. Instead, she willing allows herself to be taken by the man sent to guard her in the alley. There was no need for this gratuitous scene, and it made me cringe.

In the end, The Courage to Love was a huge disappointment, and I ended up DNFing it at the 60% mark.

My Rating: DNF – Did Not Finish

Kate Collier is still recovering from a vicious rape and trying to make a success of her dress shop when Jason Randal and Anthony Richards return to London from the Continent, intent on winning her. She’s known them for years, ever since they served with her late husband in the Peninsula against Napoleon. She’d been in love with them for almost that long. To discover they feel the same is a shock, but Kate isn’t ready to turn her life back over to a man, or men. Jason and Tony prove hard to resist, however, especially when their close friendship blossoms into desire for each other as they make Kate’s body burn with passion. The combination of their insatiable desire for her and their journey into a sexual relationship with one another is irresistible to Kate. A nightmare from her past tries to keep them apart, but the three long for a life together in spite of society’s censure, and they will not be denied.