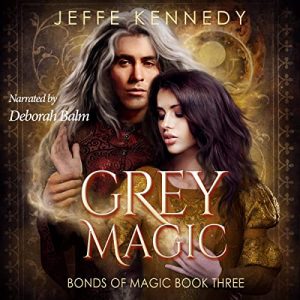 Grey Magic, the third (and final?) book in the Bonds of Magic series, picks up at the immediate moment the previous story ended. This book is not a standalone story! Gabriel and Nic have just discovered her alternate form and need to prove they are truly bonded so the Convocation will leave them alone.

Grey Magic is an exciting adventure that more than makes up for the slow-moving second title. There is action, adventure, twist, and turns. We see closure of some series-long threads, while there are other issues left unresolved. There is a full and complete acceptance by Gabriel and Nic of what they have among themselves. I loved seeing them learn more about their magic and unique bond. Both characters come into their own as they finally accept it all and open fully to each other. I love that their morals aren’t compromised and yet they accomplish so much.

The stories center on Nic and Gabriel as they first come together, then bond as Wizard and Familiar, finally falling in love. Each book brings them closer together, even as they uncover some uncomfortable truths about their relationship and the general Wizard-Familiar bond. Both start equally hard-headed and determined, but overtime, they learn to see both sides and come to a middle ground that makes both better individuals.

Narration: The story is shared via the alternating third person POVs of Gabriel and Veronica. Using a British accent, Ms. Balm narrates the entire story with a deepish and slightly raspy voice. Overall, her performance is soothing and easy to listen to. Giving a partially-voiced reading, she adjusts the dialogue for most characters, albeit just enough to know different characters are speaking. She tends to be a little higher pitched for females, and softer and lower for males. She adjusts appropriately for mood and emotion, especially with Nic.

Although Nic and Gabriel have their HEA, the whole story is more of an HFN. There are so many issues still to be addressed. There are friends and family who are missing (and could most certainly be the main couple for upcoming books). I truly hope the author continues to pen tales from this interesting magical world.