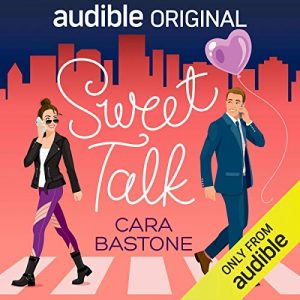 Sweet Talk was another hit for me from Cara Bastone, and new to me narrators Lidia Dornet and Chris Brinkley where a hit as well.

Last time around in Call Me Maybe, the couple met over the phone and talking and getting to know each other before they meet face to face. But in Sweet Talk the couple has met face to face, but Eliot doesn’t know who the woman is that he mistakenly texted one night because he has dyslexia and didn’t edit the contact’s name after he put it in his phone. The name is random letters, so he calls her JD during all their voice texts and then later on phone calls.

I won’t tell you who JD is because that will spoil it but she knows Eliot and has had a crush on him. During their phones they play a game where he can win or loose points when he tries to guess who she is. JD doesn’t want Eliot to know who she is because there’s a complication involving the day they met.

Sweet Talk is a great name for this story because it’s very sweet how they get to know each other. Also, don’t listen to this one before Call Me Maybe because the story lines run parallel and you will get spoiled on the reveal about the secret of that couple because Eliot is the brother to the heroine.

Lidia Dornet and Chris Brinkley did a great job with the narration. You can hear the smiles in Brinkley’s voice when he is delivering Eliot’s POV. I kept trying to figure out Dornet’s voice through most of the book because I just knew I heard her under a different name but when I listened at normal speed she didn’t sound like the narrator I thought she was. I loved their chemistry as they delivered JD and Eliot’s story.

My Ratings:
Story: A
Narrators: A

It’s officially booty o’clock, I’m alone again in my kitchen choking down a slice of terrible chocolate cake…and I’m pretty sure I just got drunk texted by the man I have a ginormous crush on.

I’ve been daydreaming about Eliot Hoffman’s dimples for two months, and even though I’m sure this was a mistake on his end, it doesn’t mean it’s not an opportunity on mine. It’s the middle of the night, and I just wanna talk to him. So I text him back.

And then somehow we keep talking…ALL NIGHT. We’re both insomniacs, so talking all night soon turns into talking EVERY night.

And here we go, from in-depth analysis of reality TV to my relationship with my family to his amazing artwork. There’s no topic we don’t cover…

Except for who I really am. It’s the only question of his I won’t answer.

As my crush turns into an avalanche of Eliot, I think of him all the time now. But if he knew who I was, the entire house of cards we’ve built this relationship on would come toppling down. I want him to be mine, but we might never be more than just a sweet dream.