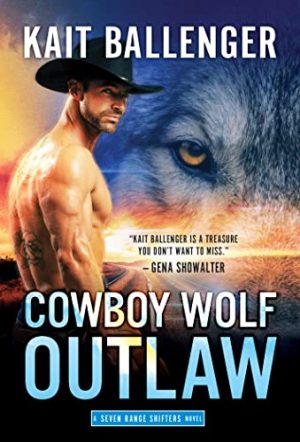 Cowboy Wolf Outlaw marks the end of Kait Ballenger’s Seven Range Shifters series. While the romance was very enjoyable, the series story ARC wrapped up with a whimper instead of bang. There wasn’t as much danger and action this time around, but there was more in the previous book so I guess that’s understandable.

Malcolm is still dealing with his grief over loosing his mate Bo. He’s always been grumpy and surly but a witch by the name Trixie seems to bring it out of him a little more.

Trixie is a bartender at a supe bar and doesn’t take men serious and flirts with everyone but one wolf has grabbed her action.

Both Malcolm and Trixie wear a mask to the world to protect themselves from getting hurt again. Every once in a while they let those masks slip but only to each other. There is an instant chemistry between them but neither want to fall in love. Malcolm lit a fuse one night when he kissed Trixie. Now they’ve been dancing around each other. Trixie wants to jump Malcolm but keep her heart out of it, he’s afraid if they go all the way his heart will get broken.

While the rise in action and story ARC of the series comes to a head with a final battle, these two have a few personal battles they struggle with on their way to a HEA. Cowboy Wolf Outlaw is a fun, sexy and touching paranormal romance. Series fans will want to see it to the end and new comers will enjoy the romance but might be a little last to the supe war.

I look forward to what Kait Ballenger writes next, perhaps she will give us a story about different shifters?

Grey Wolf assassin Malcolm Grey is set on revenge, and no one can stand in his way. With the pack facing their most challenging battle yet, his mission is simple: locate the perpetrators and destroy them. Malcolm will do anything to keep his pack safe, especially when sassy, southern belle Trixie Beauregard makes a proposal he can’t resist.

Trixie knows a few things about the dangerous cowboy sitting at her bar. One, he’s a wolf shifter. Two, his wolf pack is in jeopardy. And three, despite all his growling, this dark-eyed cowboy wolf wants her. But Trixie has problems of her own, and she knows better than to run with the wolf. The smart thing to do would be to stay away. Too bad she’s always had a taste for trouble…