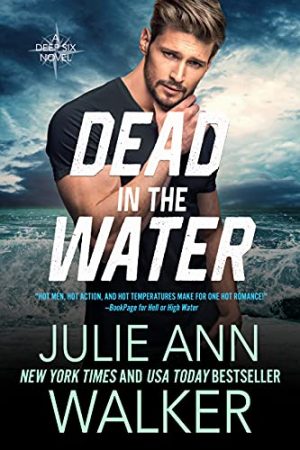 Dead in the Water is the 6th book and final book in the Deep Six series by Julie Ann Walker, and my favorite in the series.

I believe Doc and Cami’s story is my favorite because it features a second chance romance on two different levels. Doc and Cami had an “almost” night when they first met. As in they almost slept together. But once Doc found out that Cami was a lawyer and she found out she was the lawyer working for him and his friends they called it off. Cami doesn’t mix business and pleasure and Doc hates lawyers.

For the last several months the two have been in a frenemies type relationship. They love to antagonize each other and their banter is off the charts. Everyone around them knows they are into each other and think they should give into their chemistry.

But Doc won’t because he thinks he would be “cheating” on his dead wife. Cami won’t because of the business/pleasure thing but she points out to Doc that their business relationship is coming to a close soon. Doc still tries to hold back mostly because of the lawyer thing and the wife thing (the two are connected but Cami has no idea).

Dead in the Water is a funny, sexy romance that pulls on all reader’s feelings. I was smiling, laughing, and crying over Doc’s past and seeing him and Cami work through their issues. There’s also a touch of suspense surrounding the treasure the Deep Six group has been hunting over the ARC of the series. They found it in the pervious book so that plot line along with everyone’s HEA is perfectly wrapped with a satisfying bow for the end of the series.

I look forward to new stories from Julie Ann Walker in the future. Meanwhile I’ll tackle her backlist with her Black Knights Inc series. There’s a sneak peak at the end of Dead in the Water for her upcoming release, Back in Black, which is the first in the Black Knights Inc Reloaded series. So I’m thinking there will be stories set in that world.

Dalton “Doc” Simmons is having one helluva week. First, archaic laws have kept he and his partners at Deep Six Salvage from recovering the sunken treasure they’ve been after since bugging out of the Navy. Second, an approaching hurricane threatens to scatter the legendary riches across the bottom of the ocean. And third, Deep Six’s feisty, flirty attorney, Camilla D’ Angelo, has just landed on Wayfarer Island, and she represents everything he can’t stand…and everything he can’t help but want.

One look at Doc and Cami knew she’d met the man of her dreams. The medical doctor-turned Navy SEAL-turned treasure hunter has it all—brawn and brains. The problem? He doesn’t like her. In fact, no man has ever given her so much crap. But something tells Cami there’s more to his bad-tempered brooding than meets the eye.

As the storm closes in, so does a boat full of dangerous men bent on claiming the centuries-old treasure for themselves…and killing everyone on Wayfarer Island. Doc must keep Cami close if he wants to keep her alive. But all that proximity turns up the heat on the chemistry bubbling between them. For Cami, it’s more than a fight for her life, it’s a fight for Doc’s heart. If they survive, can she convince him to let go of his past for a chance at a future with her?