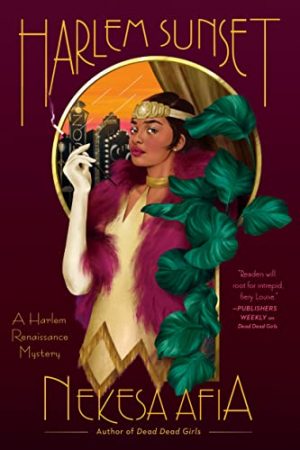 Louise Lloyd killed a man. Though that man murdered several young black women, including her own younger sister, she still feels guilty. Now, almost a year later, she and her loved ones are being terrorized buy a threat that seems far too familiar. How is she supposed to let go of the past if the dead keep trying to take her with them?

Continuing the summer after the events in Dead Dead Girls, Harlem Sunset begins with Louise Lloyd, “Harlem’s Hero,” trying to live a normal life—or as close to one as she can get—with her girlfriend of almost ten years. Even without the initial chapters that both remind and foreshadow, the knowledge that something bad is about to happen is nearly smothering from the first dance two share.

Mysteries are seldom pretty, which is one of my favorite things about them, and the author certainly isn’t kind to her hero in Harlem Sunset. Louise is tired. Soul-deep tired. And, unlike in the previous story, there’s no sanctuary to be found with her lover and tiny group of friends. This author’s consistency in thoroughly knowing her main character is undeniable, and I could feel how lost and exhausted Louise is, even as an observer. However, I was also pulled right along every time she scraped up the determination to keep going, and had no trouble believing in her throughout.

As a whodunit, I think Harlem Sunset’s greatest strength lies not so much in the solving of the case, but in the proving of it. And not merely as a means of clearing Rosa Maria and Louise’s names. Louise’s instincts steer her right a great deal, but following those instincts (as opposed to physical evidence) isn’t something she readily does. By the end of the narrative, she sees the path she’s just fought her way down clearly—because…hindsight—but I wish she’d have trusted herself more fully earlier on.

Though I enjoyed Harlem Sunset very much, I did have a couple of issues with parts of the narrative. One moment that I had particular trouble with, given the overt racism of the period, was Louise not only leaving a police station in 1927 Harlem after being accused of murder, but negotiating the release of her girlfriend, as well. I also wondered about the degree to which photographs could be “faked,” a detail which was rather crucial at a specific point during the investigation. Finally, I was thrown off balance by the way Louise’s determination in some places is almost undermined by her capitulation in others. Louise is a wonderful character, but the inconsistency occasionally left me unsure.

Visually, Harlem Sunset is a stunning work. The author is downright masterful when painting a scene for her readers, bringing the characters’ surroundings close to something that can almost be touched. The stark contrast between the muted existence during daylight and the jewel brightness of the denizens at night is one of my favorite parts of the story. Glittering headbands and cigarettes, gemstone dresses and twirling couples, shared secrets and wanting, and everyone dancing and flirting and trying too hard. It’s a lot. But, it’s beautiful.

As a follow-up to a mystery that I really liked, Harlem Sunset definitely held its own. Louise goes through some absolutely horrible things over the course of the narrative, and is no longer the same person by the novel’s end. Despite wishing she could have escaped those losses, I very much appreciate where she seems to be heading. Hopefully, there will be more stories in the series to come and Louise will find the perfect place for herself down the line.

Twenty-seven-year-old Louise Lloyd has found the perfect job! She is the new manager of the Dove, a club owned by her close friend Rafael Moreno. There Louise meets Nora Davies, one of the girls she was kidnapped with a decade ago. The two women—along with Rafael and his sister, Louise’s girlfriend, Rosa Maria—spend the night at the Dove, drinking and talking. The next morning, Rosa Maria wakes up covered in blood, with no memory of the previous night. Nora is lying dead in the middle of the dance floor.

Louise knows Rosa Maria couldn’t have killed Nora, but the police have a hard time believing that no one can remember anything at all about what happened. When Louise and Rosa Maria return to their apartment after being questioned by the police, they find the word GUILTY written across the living room wall in paint that looks a lot like blood. Someone has gone to great lengths to frame and terrify Rosa Maria, and Louise will stop at nothing to clear the woman she loves.

Reviews in the Series:
Dead Dead Girls by Nekesa Afia