Out of the Clear Blue Sky 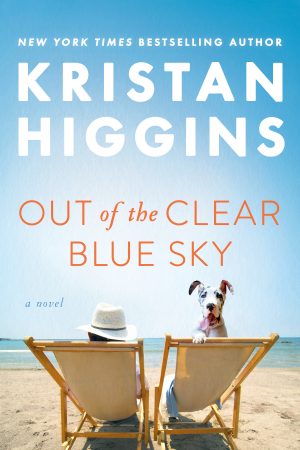 “Let’s get this wedding started,” Hannah said … She handed Melissa the bouquet, a mass of white and blush blossoms, gave Ophelia her basket of flower petals, and went around the house to give the reverend the heads-up.

“I love you so much,” Bradley whispered.

Enough with that word. “I know. Now go! Get up there!” She beamed at him, her slight irritation fading. After all, he knew his place. To adore her. Full stop.

Bradley went up to the arch and waited, alone except for Reverend White. Sadly, Dylan had refused to come for the wedding and be his best man, which would have been nice for Bradley, but you know what? It was better this way. No reminders of Lillie, except for her sister. And former in-laws. And every guest from Wellfleet.

It didn’t matter. There was a new Mrs. Fairchild in town.

She peeked around the corner. Bradley was smiling at the crowd—one hundred and seventy-four guests.

And then, the string quartet began playing Mozart’s “Ave verum corpus,” a beautiful song, the meaning of which she didn’t know, but the melody of which she loved.

Ophelia rolled her eyes, clenched the basket in her hand and stomped toward Bradley.

One more fluff of her dress, one touch from the makeup artist. Then off she went, walking slowly, smiling with bliss in her heart, her entire soul soaring at the sight of all these people, all this admiration. It seemed like the entire world was watching. There was what’s-her-name from the yoga studio. Mirabelle and Libby and their husbands from New York. Yes! Let them see her in her glory! They’d dropped her fast enough after Dennis died. The reverend’s wife, … the first selectman. Everyone had their phones out, too. Oh, she hoped they’d use the hashtag she’d come up with—#HappilyEverFairchild. It was encouraged on all the programs and the three chalkboards they’d had custom painted.

There was Bradley, teary-eyed, handsome. A gentle breeze blew Melissa’s tendrils, and the guests sat down. Melissa handed her bouquet to Ophelia and kissed her cheek, pretending that the child didn’t pull away, then joined hands with Bradley.

Surely, this was the most beautiful moment anyone here would ever see.

“I love you,” she whispered.

“I love you, too,” he whispered back, and it was so romantic!

“Dearly beloved,” Reverend White began. “We are gathered in this beautiful place to join this man and this woman in the holy bonds of matrimony.”

Then she heard the murmur. Looking at the crowd, she put her hand to the back of her head to make sure her veil was in place. It was. Ophelia was gaping, open-mouthed, at something in the distance. Everyone was gaping.

Melissa turned. Brad turned. For a second, the image was too bizarre to process.

“What . . . what is that?” Melissa said, and the microphone picked up her words. People were standing now, taking pictures, murmuring in excitement.

Something—someone—was standing out on the mud flats, not thirty yards from where Melissa stood. Someone freakishly tall and dressed in a long, black robe or dress or something. Its face was huge and gray, and dreadlocks flapped out behind it. The garment was shredded so that long rags of black fluttered in the breeze. It looked like one of Harry Potter’s Dementors . . . or the angel of death.

Bradley’s face was frozen in horror. He wasn’t scared, was he? Should she be?

“Is that Lillie?” someone asked.

Oh, my God. “Bradley? Is that her?” Melissa said, her voice shrill.

Oh, gosh darn it! Everyone was taking photos. They better not use her hashtag!

“Get security!” Melissa called, an edge of panic in her voice. “Get her out of here! She’s ruining my wedding!”

This couldn’t be happening. It could not happen. Melissa started to cry, and Bradley put his arm around her. She shoved it off, furious. He should’ve known this would happen! Everything was going to be ruined now. No one would be talking about her!

She deserved so much more.

From OUT OF THE CLEAR BLUE SKY published by arrangement with Berkley, an imprint of Penguin Random House LLC. Copyright © 2022 by  Kristan Higgins.

Just in time for summer, OUT OF THE CLEAR BLUE SKY is the perfect beach read— a funny and surprising novel about a woman forced to redefine herself when her husband’s infidelity leads to the end of her marriage just as their only child graduates high school.

When Lillie Silva’s husband, Brad, abruptly dumps her for another woman, her world implodes. The announcement is a complete surprise, but what shocks Lillie most is that she isn’t heartbroken. She’s furious. Alone for the first time in her life, she finds herself going rogue.

Beware the wrath of a woman scorned—she just might save the world.

Brad’s new love, Melissa Finch, has already played the role of a perfect trophy wife. Young, rich, and widowed, she wants a husband solely devoted to making her happy. She can teach Brad to make her happy…right? It’s the end of life as both Lillie and Melissa knew it and neither expects the next chapter to surprise them out of the clear blue sky.