The Demon You Know 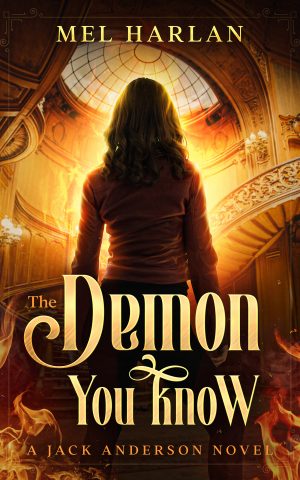 The Spanish mansion loomed above us, ivy and all, as I unstrapped John and looped him into a fireman’s carry. My 25-year-old brother’s frame dwarfed my own as I carried him to the front door.

The heavy knocker dented the historical Spanish landmark’s double doors as I slammed it down again and again. The marble archway mocked me. John gasped each breath. I had never felt so small and misplaced. With each unanswered knock, I held in the scream I felt building underneath my burnt chest.

I yelled at the front door, “I’m sure you think this is funny, but let me in! If you don’t, I promise I’m going to kick this door down.”

I reared back my foot when the front door opened.

Without a pause, I limped quickly past Lawrence, Roman’s chauffeur. The salt-and-peppered man didn’t have a chance to look surprised as I continued yelling, “Roman! I know you’re up!”

Even if I had walked into the belly of a pissed off beast, I wasn’t going to give him the satisfaction of seeing me beaten.

“Ms. Anderson, you can’t be barging in here at all hours,” Lawrence said as he closed the door behind me.

“No worries, Lawrence. Jacqueline, what a pleasant surprise,” Roman intoned. He appeared at the top of the spiral staircase in the middle of the foyer. His hair lay slick and shiny; he had been awake. His Armani suit double-buttoned at the waist. Pressed and gathered, he glided down the front staircase.

His face of all angles glanced at John who was still hoisted over my shoulder. Roman raised an eyebrow but made no move to help me.

I pushed past Roman and into the foyer, forcing a normal gait despite the pain in my right leg, lying John down on a buttery couch. I didn’t want to give him the satisfaction of seeing me hurt. Soot-covered and dark hair spilling forward, John’s eyes stayed shut. The bullet wound on his shoulder stained the shirt I used to stop the bleeding.

“Save him,” I said, kneeling by my brother’s side.

“Why should I?” Roman asked. While he played the skeptic, I knew he wouldn’t take much convincing. His eyes glittered like an alligator in the pre-morning haze.

“I can be an asset,” I said. I watched keenly to see John’s breaths rise and fall. He was still breathing, so there was still time.

“Really? And why would I bargain with you now?” Roman said. I rose to look up into his razor-sharp face. His gray eyes glinted.

I resisted the urge to tap my foot and shift side to side. He already knew there was blood in the water, no need to tempt him further.

“Yes. Details,” Roman said, savoring each syllable as it dripped off his tongue. “I think we can come to an agreement.”

I knew how long he’d been waiting to say those words. My brother and I had been looking into Roman’s dealings and trying to prove he was the one producing Tinker, the hottest drug on the market. Created by grinding up pixies, the high was supposedly incredible.

Roman’s public holdings were well-known, he created and owned GeoTrac which was one of fastest growing GPS companies in the world. He dabbled in private ventures and real estate, as well as owned the local club Gas Lamp. While most people saw the public front – the ever-bachelor and philanthropist – I knew better.

While we had never been able to prove our case against him, I knew something was wrong. I wasn’t sure what Roman was, or how deeply his ties went, but he was entrenched in Houston.

“And you have no one to ask for help,” Roman said with gleeful energy.

I remained silent. There was no one waiting to arrive to my rescue at the last moment. Certainly not the government that betrayed me or anyone from the Bureau. I knew there was only way this would end.

“But what to ask for…” Roman said as he tapped his chin in faux contemplation.

“We both know how this ends,” I said. “You want me to be yours.” I had found a small slice of peace working with my brother, even if it hadn’t been perfect, and would never have entertained working for Roman if John hadn’t been in this situation. I felt the life I had wiggled myself into fall away. With John barely breathing, a string of dead-end jobs behind, I knew I could only live with myself if John made it. Roman had asked me to join his team, and I was out of options and ready to pay the price.

He dropped the taunts and looked me in the eye. “Yes, you will be of my flesh, my Hand,” Roman said.

I felt myself blanch – I knew the price would be steep, but that didn’t sound like a job offer. I wasn’t sure what he was or what he meant, but I had a sinking feeling that I would regret my ignorance very soon.

“It’s only fair. A body for a body. Unfortunately, you don’t have much time.” Roman paused for dramatic effect. “Tick tock, kitten,” said the alligator.

Meet Jacqueline “Jack” Anderson, a fiercely independent P.I. who’s made more mistakes than she can count. Her most recent? Making a deal with her enemy Roman to save the only family she cares about.

Roman’s got a few secrets of his own and an empire he’s trying to protect. He’ll use his bargain with Jack – for control over her body, mind, and will – to make her his Hand and solidify his claim on Houston. In searching for answers, Jack isn’t sure if she should trust the demon she knows or try to escape the grave she dug herself.

A rival challenges Roman’s domain, but only one can rule Houston. As Jack searches for answers, she must decide where she belongs to protect her city.

Mel Harlan is a consultant, writer, and author of the new novel “The Demon You Know”. With decades of reading and writing fantasy, Mel created the series she always wanted to read with the Jack Anderson novels. The sequel to her debut novel is coming in Fall 2023.

Mel lives and works out of her home in Houston, TX. She is currently enjoying newlywed life while searching for the best latte, dancing on roller skates, or reading poolside.