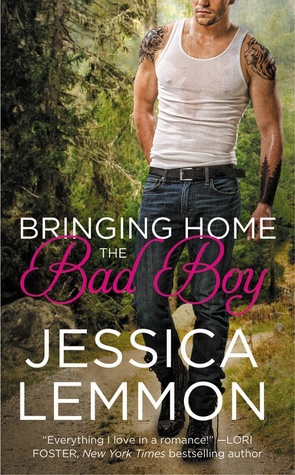 Rae died four years ago, leaving behind her husband Evan and their three-year-old son Lyon lost and hurting. Her best friend, Charlie, has kept her spirit alive for Lyon and been a good friend to Evan. Deciding it’s time for a change, Evan and Lyon move to the small town where Charlie lives, the same vacation community where he met Charlie and Rae when they were teens.

Bringing Home the Bad Boy has some sweet and tender moments. I enjoyed seeing Evan deal with his lingering grief through his art. But ultimately, I struggled with this one. Perhaps it’s because Charlie struggles with her attraction to Evan the whole time. She never feels right “stepping into her best friend’s family.” It is a constant struggle until it isn’t, which is basically the last page. Charlie has a lot of issues, all of which are understandable, but we don’t see her process and heal; it just kind of happens. There is never any mention of therapy, which she needs.

Additionally, I didn’t care for the full court press that Evan uses to pursue Charlie. At times, he is a bit passive aggressive with his feelings towards Charlie. There is a HUGE elephant… his dead wife/her BFF. It felt kind of slimy that he’s putting moves on Charlie without talking to her about her feelings first. Eventually they do talk, and I appreciate his attempts to explain his feelings, and how his relationship with Charlie is different than with Rae. But by then, I was annoyed.

There are a few other issues and conflicts that were predictable and even eye-rolling. In the end, I just never fully got behind Charlie and Evan as a couple. It’s a tough situation and the author makes an attempt to capture that in Charlie but never shows the reader that Charlie is healing or moving on in a meaningful way.

Evan Downey needs a new beginning. Since the death of his wife five years ago, the brilliant tattoo artist has shut himself away in a prison of grief that not even his work can break him out of-and what’s worse, Evan knows his son Lyon is bearing the brunt of his seclusion. Moving back to the lake town of Evergreen Cove where he spent his childhood summers is his last chance for a fresh start.

Charlotte Harris knows she owes it to her best friend’s memory to help Evan and his son find their way again, but she can’t stop her traitorous heart from skipping a beat every time she looks into Evan’s mesmerizing eyes. Charlotte is determined to stay strictly in the Friend Zone-until a mind-blowing night knocks that plan by the wayside. Now, if they’re brave enough to let it, Charlotte and Evan might just find a love capable of healing their broken hearts . . .