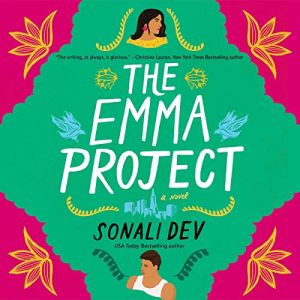 The Emma Project is the fourth and presumably final story in the wonderful Rajes series. The story focuses on youngest sibling, Vansh, and Naina, Yash’s once-best-friend-fake-fiance, who was publicly dumped when he fell in love with India (Incense and Sensibility). The pair find themselves at odds, competing for a private endowment but forced to work together or risk losing all of the funding.

On the surface, Vansh and Naina are complete opposites. She grew up with a misogynistic, abusive father who never approved of her non-traditional ways and kept her mother under his thumb. Naina did what she needed to in order to escape Dr. Kohli, which included her fake engagement with Yash. Naina learned to never depend on anyone and to fight for every accomplishment. Meanwhile, Vansh grew up in a loving home, pampered and spoiled because he was the beloved baby. Yet, they are alike in so many ways: kindred souls. Although doing it for different reasons, both believe in making the world better though charitable work. And again, for different reasons, both feel disconnected from family and friends. They cannot deny their mutual attraction when working together, and once they start, they cannot stop the spark that flames between them.

Naina and Vansh both have a lot of growing to do before either can be in a committed relationship. Vansh believes the world and people are innately good, and that with enough perseverance one can overcome anything, after all, it worked for him. He makes mistakes, pushing others too far, causing conflict and problems. Yet, he learns and grows from these mistakes. Naina, on the other hand, has conditioned herself to avoid conflict and please her mother because her mother’s life has been so hard. Couple this with the abusive conditions in her home due to her father, and Naina has no ability to love or trust. I was a bit disappointed in how suddenly her mom changes her tune at the end of the story, and recognize that both mom and daughter would benefit from therapy; however, the author does a good job of connecting Naina’s behavior to her upbringing and making Naina self-aware. The author is able to create sympathy for Naina without making her pathetic. Ms. Dev does a fabulous job of getting readers to understand both Naina’s and Vansh’s view of each other, while simultaneously demonstrating self-awareness. This allows for balanced characters.

In addition to the primary story, the author gives us a few POVs from cousin Esha. She’s been trapped inside her own head since her parents died; living in isolation on the top floor of the Anchorage for decades. We learn much about her past and what’s been going on with Esha all these years. We also witness her finally get better and fall in love.

Narration: The story is shared via the third person alternating POVs of main characters Naina and Vansh, with a few from Esha. Soneela Nankani, a classically-trained actress of Indian and Ghanaian descent, performs each character fabulously. She covers a multitude of dialects and accents. She successfully portrays a wide range of ages. Each character is unique and distinguishable from the others. She pulls off male voices that sound masculine. And she infuses so much emotion into each character, bringing them to life and making the story come alive.

In the end, The Emma Project is a wonderful standalone romance and fitting end to this marvelous series. Ms. Dev is a master at creating three-dimensional, engaging characters who must overcome personal obstacles in order to heal and move forward. Her stories are exciting and emotionally satisfying. I highly recommend the entire Rajes series.

No one can call Vansh Raje’s life anything but charmed. Handsome—Vogue has declared him California’s hottest single—and rich enough to spend all his time on missions to make the world a better place. Add to that a doting family and a contagiously sunny disposition and Vansh has made it halfway through his twenties without ever facing anything to throw him off his admittedly spectacular game.

A couple years from turning forty, Knightlina (Naina) Kohli has just gotten out of a ten-year-long fake relationship with Vansh’s brother and wants only one thing from her life…fine, two things. One, to have nothing to do with the unfairly blessed Raje family ever again. Two, to bring economic independence to millions of women in South Asia through her microfinance foundation and prove her father wrong about, well, everything.

Just when Naina’s dream is about to come to fruition, Vansh Raje shows up with his misguided Emma Project… And suddenly she’s fighting him for funding and wondering if a friends-with-benefits arrangement that’s as toe-curlingly hot as it is fun is worth risking her life’s work for.