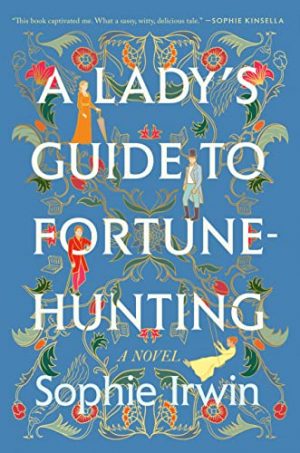 A Lady’s Guide to Fortune Hunting is exactly what the description says it is: Kitty Talbot needs a fortune. Or rather, she needs a husband who has a fortune. Left with her father’s massive debts, she has only twelve weeks to save her family from ruin. Set in post-Napolean War England, near the end of the Regency Era when the ton reigned supreme as the ultimate judge of social standing and etiquette, country girl Miss Talbot must break into this elite world to find a husband whose fortune can pay-off large family debts and secure the financial future of her sisters.

Irwin writes a book which is straight-forward and does not hide its agenda, nor does it get bogged down minutia of a typical historical romance. That probably makes it a good entry level book for those who aren’t ready for or have the patience for the wordiness of Austen. Of course, that wordiness, the descriptive approach is what Austen lovers appreciate about her style. Modern readers who aren’t accustomed to lengthy descriptions will appreciate how direct Kitty is in a world where she doesn’t make the rules.

Kitty is a quick study and not concerned about love. Her approach is utterly pragmatic. The late Mr. Talbot was a gentleman, but broke with his family to marry outside of his social circle. He married for love. As a result, his family cut him off. He and his wife settled in the country, beyond the judging eyes of the ton, and had a good marriage—except for the gambling thing, a holdover from his single days in London. When he passes unexpectedly, he leaves behind enough debt that the girls will lose their home and any remaining pitiful social standing. Worse than penniless, Kitty sets out for London to change their circumstances.

Kitty sets her sights on the younger brother of Lord Radcliffe, a veteran of the Napoleonic Wars. Since returning home, he prefers a quiet life at his estate in the country to the hustle and bustle of life in town—especially during the social season. When Lord Radcliffe learns that his brother is in love and that the woman he intends to marry is decidedly beneath their family standing, he sets out for town to put the cabash on the whole affair.

What recommends this book most is the banter. Kitty can utterly hold her own against Lord Radcliffe. A Lady’s Guide to Fortune Hunting is worth the read for the conversations, not the rapturous descriptions of people and places. No one is surprised when Radcliffe and Kitty fall for one another, the reader can figure that out from the get go. Even when Radcliffe is downright rude and offensive, Kitty remains undeterred from her goal. There is a bit of action at the end of the book which solidifies their attraction, but will they ultimately act on it? Kitty is still in need of a fortune and Radcliffe is still the protector of his family name.

The book reaches a satisfying ending, and I will read Irwin again for what I can only call historical romance-lite.

Rating: B+ Liked It A Lot

Kitty Talbot needs a fortune. Or rather, she needs a husband who has a fortune. Left with her father’s massive debts, she has only twelve weeks to save her family from ruin.

Kitty has never been one to back down from a challenge, so she leaves home and heads toward the most dangerous battleground in all of England: the London season.

Kitty may be neither accomplished nor especially genteel—but she is utterly single-minded; imbued with cunning and ingenuity, she knows that risk is just part of the game.

The only thing she doesn’t anticipate is Lord Radcliffe. The worldly Radcliffe sees Kitty for the mercenary fortune-hunter that she really is and is determined to scotch her plans at all costs, until their parrying takes a completely different turn….