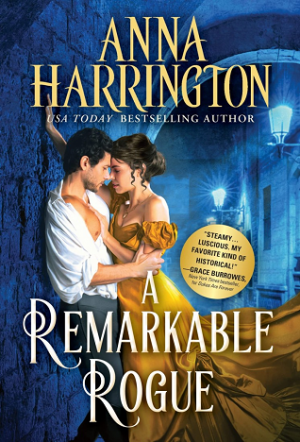 Opening days after the conclusion of A Relentless Rake, A Remarkable Rogue picks up with Alexander Sinclair, Earl of St James, (hero in last book) and Captain Nathaniel Reed continuing their search for the head of the evil Scepter organization. Nate is charged with getting information from Lady Sydney Rowland, who may be a pawn or a direct member of Scepter.

Sydney is tired of being constantly on edge and afraid for the safety of someone in her care, someone Scepter is using to blackmail her into running their errands. When Nate approaches her, she doesn’t trust him, but she’s frustratingly attracted to him.

A Remarkable Rogue is another an entertaining story in Ms. Harrington’s Lords of the Armory series. I loved seeing these two seemingly broken people learn their true worth through helping one another and serving the greater good. Both have sworn off love because of loss and betrayal. Yet as they work together and grow close, they cannot deny their attraction and connection. It takes some convincing, but eventually they get their HEA. I love that they treat one another as equals, regardless of station and standing. They support one another and genuinely care for those around them. They work well together and as a couple.

The continuing saga of Scepter and their efforts to overthrow the monarchy appears to be coming to a climax as the half-brothers and their team get closer to uncovering the truth. There is quite a bit of action in this one, and I thought maybe this would be the final book. However, I see on the author’s website that another book, A Problem Princess, comes out next spring.

Overall, A Remarkable Rogue is an enjoyable romance and exciting adventure. Due to the nature of the over-arching storyline, I strongly recommend reading the books in order. I look forward to see what happens next for these dashing lords and their ladies.

Lady Sydney Rowland, Baroness Rowland, has spent a lifetime keeping secrets, one of them being her young son. Now that the husband she despised is dead, she’ll do anything to get her son back and protect him however she can. And that includes risking her life when she’s coerced into working for a revolutionary group determined to overthrow the government.

Captain Nathaniel Reed has heard of Sydney’s involvement with Scepter. Though he quickly learns that Sydney is innocent, he’s determined to keep the secretive widow at arm’s length despite the attraction that burns between them. But when she turns to him for help, nothing will stop him from coming to her aid and showing her exactly what she means to him…