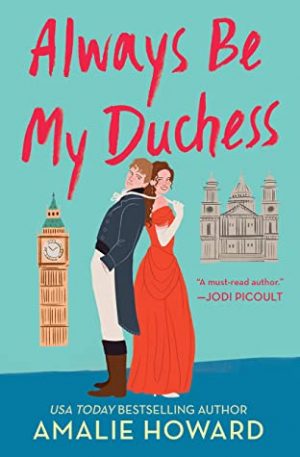 Always Be My Duchess is a delightful retelling of the 1990 Pretty Woman movie. The story follows Lord Lysander Blackstone, Duke of Montcroix, as he works to accumulate more wealth while dismantling the things his father held dear when he was alive. He has his eye on a valuable piece of land, but the seller wants it to go to a family man. So, the duke hires French ballerina Geneviève Valery (Nève) to pretend to be his fiancée for the season.

The story follows the original movie very closely, despite the century, which makes it predictable but fun. I loved seeing how the author addresses each of the movie’s major scenes; all of which are successfully recreated for story’s purposes. She writes unique characters with their own personality traits, but the resemblance to the movie characters is clear. My favorite is the slimy Viscount Treadway, who mimics Jason Alexander’s Stucky to a tee.

Lysander and Nève are a mismatched, never-meant-to-be couple, much like Edward and Vivian (Pretty Woman). Both are clear on their intentions and long-term goals, yet they cannot overcome their mutual attraction. As they spend more time together, including intimate interludes, they grow to be friends. Lysander is the one who must do the lion’s share of reform so that he will be someone worthy of Nève’s love. True to the movie, Lysander makes many missteps before landing safely.

Always Be My Duchess is an entertaining historical romance worthy of a read, but its ties to Pretty Woman make it all the more special and fun.

Lord Lysander Blackstone, the stern Duke of Montcroix, has only one interest: increasing his considerable fortune. After a series of betrayals, he keeps his emotions buried deep. Money, after all, can’t break a man’s heart—or make promises it can’t keep. But when his reputation for being heartless jeopardizes a new business deal, he finds himself seeking a most unusual—and alluring—solution…

Once an up-and-coming ballerina, Miss Geneviève Valery is now hopelessly out of work. After refusing to become a wealthy patron’s mistress, Nève was promptly shown the door to the streets. When she accidentally saves the life of a handsome duke, she doubts the encounter will go any better than her last brush with nobility. But instead of propositioning her, Montcroix makes Nève an offer she would be a fool to refuse: act as his fake fiancée in exchange for fortune enough to start over.

Only neither is prepared when very real feelings begin to grow between them. They both stand to win… but only if they’re willing to risk their hearts.