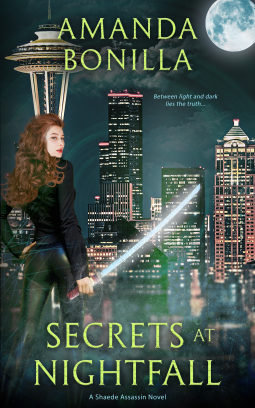 For Darian and the gang it’s been a year between events from the previous book, Shadows at Midnight (2015) but for readers it’s been seven years! And this reader was ready for more Darian, Tyler, Xander and more.

Secrets at Nightfall is the long awaited 6th book in the Shaede Assassin series by Amanda Bonilla, and it was all an urban fantasy reader could want. It’s not a standalone; you do need to read the rest of the series or you will have no idea what’s going on. In fact, if you haven’t read the previous books READ THEM or if it’s been a while, I recommend a reread. Luckily I had just recently read the previous book so I was ok picking up where the story left off.

Secrets at Nightfall finds Darian feeling alone and uneasy because her Shaede family has left town to take care of Shaede business, and there’s a heaviness in her chest at the feeling that something missing from her life. She knows there’s something going on with her memories, but she is not sure if those are what is causing her melancholy.

The Synod, the governing body for the Jinn, took her missing memories because they fear Darian and her bond with one of their own, Tyler. They are doing their best to keep the two apart. The Synod believes they are too dangerous together because of a mysterious thing they call Nys’Asdar.

While some things start to fall into place for Darian the biggest memory reveal doesn’t happen until the last chapter where she gets an information dump as her memories about Tyler hit her all at once. But before that happens she has to do something she is not known for, trusting others. Darian no only has no memory of Tyler but anything or anyone associated with him. She was hired to fulfill a contract by killing someone named Levi. Luckily her memories about him come back in time to save her friend from being assassinated by her.

Secrets at Nightfall definitely read as a bridge book, bridging the plot lines between the previous book and the next book to come in the series. I’ve got to say I’m not sure if this Tyler is the Tyler we all know and love. I think there is more darkness and heartbreak to come. I hope in the next installment there will be more from Xander, Raif and Asher, Darian’s adopted Shaede family. All the mystery surrounding Tyler and Darian’s bond, the Nys’Asdar, the Synod and the Arx will all come to ahead soon. It’s a pressure cooker waiting to release, I just hope all of our beloved characters survive it.

For over a year, Darian has lived in the dark.

Between her mysterious memory loss and the constant headaches that plague her, Darian has had enough. And the million-dollar bounty on her head certainly isn’t helping either. It’s tough to maintain her under-the-radar status when every ambitious assassin in the Pacific Northwest has eyes on that sweet payout!

Desperate to reclaim her lost memories—there could be a light at the end of the tunnel in the form of Camden Walsh. But as is custom in the supernatural world, his help offers more questions than it does actual answers. The Alpha Werewolf knows who’s placed the bounty on Darian—and it has to do with a centuries-old secret society that’s determined to save humanity from the greatest paranormal threats, which is supposedly Darian herself!

What’s more, Camden knows about Darian’s memory loss and has been instructed by a mysterious benefactor to help her. As anxious as she is to reclaim her lost memories and rid herself of the debilitating headaches, she fears that the truth might be the biggest threat to her life yet…