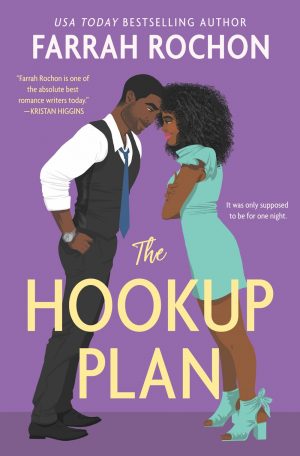 London Kelley, superstar pediatric surgeon (and one of the three women who became good friends after a live tweet incident outing that they were all dating the same jerk at the same time), is at her 15 year high school reunion when she reconnects with her nemesis Drew Sullivan. The thing is, he never knew how much London saw him as competition (and still does apparently) because he was half in love with London from the minute Drew moved into her high school Junior year. London needs stress relief, so she propositions Drew for a one-night-stand, thinking he would be out of her life after the weekend was over. Much to her annoyance, Drew shows up at London’s hospital Monday morning.

The Hookup Plan is the third in Ms. Rochon’s delightful Boyfriend Project series. While the main female characters are all connected, the stories are standalone. London is a strong, self-made woman who likes to have control. Drew Sullivan messes that up because she cannot help herself around him. At first I was annoyed that a woman as smart and progressive as London keeps having sex with Drew then hating herself for it. However, the author does a nice job of transitioning London from someone who despises Drew to someone who recognizes why she’s held onto that anger and that Drew is not competition.

London has so much to offer and has had so many disappointments. I loved watching her learn to love herself not for all she’s accomplished but because she’s a decent human being. I loved how she stands up for others. Drew is sure of himself, but needs to heal a large wound before he can move forward. I loved seeing their friendship develop. The characters are both relatable and real, despite their wealthy and influence. The author got me inside their minds and hearts, and I understood their motivations and actions.

Overall, I’ve enjoyed getting to know these characters who’ve come a long way since we first met in The Boyfriend Project. Each woman is unique and her story true. This series is wonderful and I highly recommend picking up The Boyfriend Project first, and read all three titles.

Successful pediatric surgeon London Kelley just needs to find some balance and de-stress. According to her friends Samiah and Taylor, what London really needs is a casual hookup. A night of fun with no strings. But no one—least of all London—expected it to go down at her high school reunion with Drew Sullivan, millionaire, owner of delicious abs, and oh yes, her archnemesis.

Now London is certain the road to hell is paved with good sex. Because she’s found out the real reason Drew’s back in Austin: to decide whether her beloved hospital remains open. Worse, Drew is doing everything he can to show her that he’s a decent guy who actually cares. But London’s not falling for it. Because while sleeping with the enemy is one thing, falling for him is definitely not part of the plan.