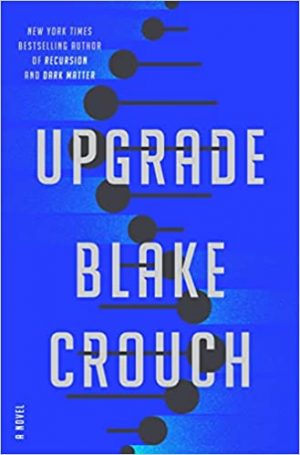 Speculation about the brain’s capacity has long been a topic of science fictions writers. We daily live with differences in intelligence, education, diminishing capacity and disease as we age, and wonder about environmental factors on what our brains are capable of doing. Mayim Bialik is hawking brain supplements. The idea that we only use 10% of our brain’s capacity, however, is a well-studied and debunked myth, but it’s fun to play “what if?” In the 1956 classic Forbidden Planet, Morbius artificially doubles his intellect by the use of an alien relic. Recently both Luc Besson’s Lucy and Limitless based on the 2001 novel The Dark Fields by Alan Glynn toyed with the fictional concept of using the brain to its fullest capacity through the use of a drug. Bestselling author Blake Crouch takes a new approach to this theme in his latest book Upgrade by changing the actual structure of our DNA to increase not only intelligence, but improve other physical traits as well through the vehicle of a virus.

My father tested at a genius level intelligence quotient (above 160) –I did not– and it was as frustrating as it was interesting to watch the way his brain worked while I was growing up. I totally agree that people’s brains work differently and that IQ is a very narrow method for trying to quantify that process, but it was clear to me and anyone who knew my father that he was working on a whole different plane. One of my favorite games as a child was to rattle off long lists of numbers for him to add or multiply. It was faster to tell him the problem than I could manually input it into a calculator. Perhaps this is why Upgrade was appealing to me. I share my father’s DNA. Could mine be altered to be like his with a few tweaks? Could anyone else’s?

Main character Logan Ramsay has a just slightly higher-than-average IQ at 118, this doesn’t even meet the threshold for gifted, but is nowhere near his mother’s incredible intellect. Her fictional brain ranks her as probably the smartest person in the world. Working in her chosen field as a geneticist, she tries to genetically modify Chinese rice to stop a specific kind of rice blight. Her motives were good. Noble. Her delivery system could have amazing impact on world hunger. Instead, her creation mutates unpredictably and creates a plague which nearly wipes out the world’s food supply, even changing weather patterns. As a result, the world outlaws genetic modification to people and food. Also trained as a geneticist, having worked with his mother, Logan is forever attached to her crime.

Logan has worked to disassociated himself from his mother’s crimes and now works for the government, uncovering and arresting people who violate the anti-genetics laws. As a scientist, this work is painful, but he also feels it as a form of atonement. Logan loves his wife and child and strives to be for them what his mother never was for him. To protect them…until he begins to notice changes in himself. Now the government agency he works for wants to study him.

In most of stories where the author increases a character’s intellect, they generally decrease emotions, like being smarter means you have to be more logical and therefore don’t have capacity for emotions anymore. Even Sheldon on The Big Bang Theory seems to suffer from a lack of empathy. I’m happy to say that was not the case with my father. He was as loving and compassionate as he was brilliant. Crouch’s character seems to struggle, but does hang on to emotions, especially the love of his family, through a majority of the story. While he does report some diminishing, love is his highest motivator. I applaud that Crouch wrote his main character this way. Still, he writes himself into an inevitable ending rather than taking a twist like Limitless. The writing is good, it’s both bold and imaginative. Reads like a thriller, full of action and not bogged down in the science which, to me, is interesting.  Excellent read, liked it a lot.

But before long, he can’t deny it: Something’s happening to his brain. To his body. He’s starting to see the world, and those around him—even those he loves most—in whole new ways.

The truth is, Logan’s genome has been hacked. And there’s a reason he’s been targeted for this upgrade. A reason that goes back decades to the darkest part of his past, and a horrific family legacy.

Worse still, what’s happening to him is just the first step in a much larger plan, one that will inflict the same changes on humanity at large—at a terrifying cost.

And even as he’s fighting, he can’t help wondering: what if humanity’s only hope for a future really does lie in engineering our own evolution?