The True Purpose of Vines 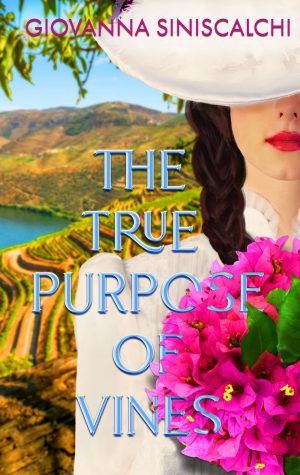 “I have a story to tell. It’s about this fountain. Tourists love to hear the legend of the maiden and the moor—”

“As you wish.” Julia sat on the marble steps. Dribbling sounds echoed in the secluded corner, and she hugged herself, the cold of the stone seeping through her thin skirt. What had produced the change in him? A moment ago, he enjoyed himself, appreciating the village’s sights. Maybe it was the guide he found lacking.

He exhaled audibly. “Go on, then. Tell away.”

“Some other time.” The air by her side shifted, and she lowered her gaze, studying her palms.

He bumped her with his shoulder. “Please?”

“Perhaps I want to listen to your voice. Indulge me?”

His own voice, low and smoky, made her cheeks warm. If he mocked her, she would stand and leave. She chanced a peek. He had crouched on the same step, hips only an inch from hers. While his posture was nonchalant, his stare enthralled her. His blue eyes flickered in tune with the torchlight, the intensity invading her defenses. She caught her breath as a thrill raced down her spine. Fear or excitement? She couldn’t tell. A faint note of freshness rose on the breeze, no doubt a trace of his cologne, evaporating like a decanting wine.

Julia smoothed her skirts, studying the tiny vines painted on the hem. “It happened centuries ago when the Moors invaded the Douro. The Portuguese had never accepted the Sultan’s rule.” She smiled. “By now, you must know we are a stubborn lot.”

He leaned on the fountain’s rim and crossed his ankles. “Some more than others.”

Their knees touched, and a languid sensation flooded her legs, pulsing through her veins, making her lightheaded.

Shaking her head to dispel the effect, she scooted a few inches to the right. “A local girl, beautiful and kind, used to come here and sit on these steps, singing and weaving vine baskets for her father. The dashing Sultan’s son, returning from Gibraltar, heard her, and her gentle melody enchanted him.”

His eyes were crystalline in the fire’s glow. “And then?”

“He came every day. At first, he was content to listen to her melodies, and then they fell in love. Neither her family nor the Sultan blessed the romance.”

Julia glared at him. “You want me to stop?”

“They planned to run away, to live their passion where differences didn’t matter. On their escape day, the King’s army invaded the city, expelling the Moors to the south. The Sultan’s son gave up his riches and came back for her. Before they could reunite, the soldiers killed him. The girl sat here, pouring out her tears. Legend says her sorrow created the fountain.”

He stood and brushed his trousers. “Is there such a place?”

Without him seated on the step, the stone chilled her. “I beg your pardon?”

“A place where differences don’t matter?”

“I guess their differences brought them together. Do you like it?” She cringed at the hopeful note in her voice.

“Do you? I didn’t take you for the romantic sort.”

Julia rose and shook her skirts. “I’m not. But you can’t dismiss these things, you know. The tales, the myths, the idioms, the food. They are as much a part of Vila Nova as the people are.”

“Charming.” He leaned over the fountain. “But why the coins?”

“The town folk believe it works like a wishing well, granting any heartfelt request made on Saint John’s Day. Some say it helps to find a spouse.”

He tilted his head to the side. “Your husband.”

She averted her face. If she was married, she wouldn’t be here with him, would she? “I don’t have one.”

He reached inside his coat and held a coin between his elegant fingers—fingers that had probably never seen a single day of manual labor. With the copper reflecting the torchlight, it looked like he had caught a firefly. “Tell me what you wish, Julia, and maybe it will come true.”

“I don’t believe in folktales.” She hid her calloused hands behind her back, creasing the paper bag with the pastries. “And that’s not how it works. You have to wish for yourself.”

He shrugged and aimed. When he flipped the coin, it went flying and landed in the pond’s center.

“Your marksmanship has improved. Have you been practicing?”

It started as a groan, but then it changed his entire face, softening the stern lines and making his eyes twinkle. He laughed. Warmth tingled on her insides, and she felt like the wittiest of mortals.

The pastry. Tourists loved Portuguese sweets. Reaching inside the paper sack, she proudly offered Griffin one.

“A Pastel de Belem. See all this crumbly dough?” She pointed at the perfect golden crust on top. “It’s filled with cream. Will you try it? I promise it’s better than it looks.”

He frowned. “I’m thinking about it.”

“Why?” Julia bit into the pastry. “See? It is not poisonous.”

She offered him the second sweet, but he balked. One more step and he would plunge into the fountain. He frowned, and his spine bent a few degrees backward as if prepared to fend off ominous, bloodthirsty foes and not a dainty pastel.

Laughter bubbled out of her. “This is a surprise. A big Englishman afraid of pastries.”

He glared. “Are all Portuguese women impudent like you?”

“I don’t know… are all Englishmen scared of sweets?”

“Certainly not. In fact, I’ll dare you.” Smiling smugly, she gave a hearty bite, exaggerating the “hmm” when the cream burst inside her mouth.

When she realized the change in him, it was too late. Eyes burning, he grabbed her wrist with his right hand and took the pastry with his left, keeping it out of her reach. She watched as he dropped the perfectly fine pastel to the ground.

He pulled her close. The sudden movement tilted her balance, and she tripped, landing on his chest. Before she could protest, the Englishman snaked his arms around her back. His scent of leather and bergamot made her head spin. She stilled, frozen on the outside, while inside, waves of heat traveled up and down her chest. Undaunted, he brought his face within an inch of hers. And then closer.

And then he kissed her.

Her eyes fluttered shut. His lips were firm and warm, with a faint trace of spirits. Sounds faded into hearts thumping, hers and his.

When his tongue traced the seam of her lower lip, Julia sputtered.

Had he just tasted her?

Leaning away as much as she could with his arms still circling her back, she stared at his face. He frowned, his eyes intent on her lips.

“Only if you tell me where you live.”

An explosion surprised them both. The midnight fireworks sparked colorful arcs in the sky. Splaying her hands on his chest, Julia pushed. He stepped back, losing his hold on her torso. Cheeks flaming, legs unsteady as if she had imbibed too much port, she spun. He caught her wrist, but she tugged, and her arm slipped from his grip, leaving him grasping only the half-eaten pastry. Heart beating in her throat, she raced away, boots clattering on the cobblestones.

Panting, she touched her lips. Her chest shook with a rush of giddy laughter, and she covered her cheeks with her palms. Englishmen were oblivious about most things, but by Saint John, how they kissed.

A woman desperate to save her vineyards…

Julia Costa is the best winemaker in the Douro. After her late husband burdened her lands with debt, she vows to defend her legacy by any means necessary.

The Englishman sent to uncover her secrets…

The last thing Griffin Maxwell wants is to waste time mired in a Portuguese backwater village. Still, to guarantee a partnership with Oporto’s largest trading firm, he agrees to travel up the Douro River and chase a reluctant debtor.

A meeting of two cultures…

Nothing prepared Griffin for the headstrong winemaker. She tempts him to enjoy Portugal’s vibrant tastes and threatens his carefully constructed plans. The arrogant Englishman arrived at Julia’s lands believing himself entitled to everything, including her heart. But how can she resist an attraction headier than a vintage?

An enemy too powerful to fight alone…

When a mysterious plague decimates Europe’s vineyards, Griffin and Julia struggle to find a cure. They must compromise to face this new threat… or lose everything. Will they allow cultural differences to separate them, or will they fight for the love of a lifetime?

If you love enemies-to-lovers novels and enjoy traveling to breathtaking places, this historical romance will capture your heart.

The True Purpose of Vines received the Highly Recommended Award of Excellence from The Historical Fiction Company and won a Literary Titan Book Award.

Giovanna Siniscalchi chased narrative arcs and climax points in the Nasdaq for twelve long years working as an economist. Still, her romantic imagination was wasted in the financial markets, so she decided to put it to better use: write fiction. She is married and has two great kids. Her passions are eclectic, including reading, traveling, surfing, wine, and of course, historical romance.