Today I’m happy to welcome Peggy to the blog. She’s talking about Westerns and telling us more about her most recent release. Please help me welcome her!

Let’s think about this…

What would have happened if Marshal Matthew Dillon had ridden off into the sunset with someone other than Miss Kitty Russell? Impossible you say! Are you sure?

Ahhh, westerns. What’s not to love? I’m addicted. Load me up on some Wild Wild West with Jim West and Artemis Gordon. (This is the original Wild Wild West series, not the one with Will Smith in it)  Better yet, give me some Rowdy Yates and Wagon Train.  Or how about all that Dutton drama. Yellowstone will never be the same. Yeeehawww, I love it all! I’m ready to saddle up and ride at the drop of a hat, slappin’ leather and chasin’ after ornery steers, bad hombres, and finding new adventures over the next horizon. Where did all this love for the wild and crazy west come from?

I’ve always been a horse and cowboy kind of girl. In my younger days, I roped steers. I chased cans (not as exciting as it sounds). I roped goats. Anything and everything I could do on a horse, I did it. Okay, maybe not EVERYthing…

Though I do love me some cowboys. What is it I love about them, you ask? Again, everything! Worn out dusty boots peeking out from under a frayed pair of jeans. And those jeans? Need I say more? Wink. Wink. I love a cowboy’s swagger. Their sense of honor. Their yes ma’am and no ma’am. In fact, I love cowboys so much…I married one. He’s a handsome, hard-working, tough guy who has served his country and is loyal to a fault with an unwavering sense of honor and respect that is sure to make a lady swoon..

This brings me back to Marshal Dillon and Miss Kitty. What do you mean you don’t know who they are? Well, that must mean you’re a little younger than this author, so I’ll clue you in. Matt and Kitty are the two legendary characters from Gunsmoke—an epic American western television show that aired on CBS for twenty seasons (1955–1975), becoming the longest-running prime-time television western in history—and their love affair was legendary.  Though Matt did seem to have a hard time with commitment. And his job didn’t help. Always having to travel out of town to chase after his latest bad guy. Then there was Miss Kitty, who was ahead of her time. A strong, savvy businesswoman who could stand on her own two feet and didn’t need a man to tell her what to do. No, siree!  She did just fine owning and running her own establishment. But that didn’t mean she wouldn’t go weak in the knees when the marshal came for a visit. And let’s just say Matt was a regular at Miss Kitty’s place.

Now, I’m not saying Matt Dillon didn’t chase Miss Kitty all around the Long Branch Saloon trying to steal some alone time with her. And I’m not sayin Miss Kitty was runnin’ away either. But you gotta ask yourself why did that handsome lawman seem to love Miss Kitty so much and still run from the marriage noose? Makes you wonder why he seemed so devoted to her and yet would never close the deal. Could it be that somewhere along the trail heads were turned and hearts were stolen? For us western romance fans that would have been unimaginable. But was it impossible? Inquiring minds want to know. Just where was Marshal Dillon when he wasn’t at Kitty’s place? Hmmm . . .

I believe there’s a whole lot more story going on than we were allowed to see. Now I know there are those of you out there who are gettin’ downright mad at me for even suggesting Matt Dillon would cheat on Miss Kitty. So let’s clear that right on up. I’m not sayin’ he was cheatin’ exactly. Besides, I seem to recall an episode or two where Miss Kitty had her head turned in a different direction herself. All I’m sayin’ is that common sense tells us that the possibility exists there was someone else waiting in the proverbial wings, and I for one, would love to know just who that someone was. 

On a personal note, I think it would be fun as hell to write that story. But until that time comes, I have a new series called To Love A Lawman. It’s a three-book series about U.S. Marshals in Jefferson, Texas circa 1880s.  The first book – TEXAS HONOR, was released in January 2022. The second book – TEXAS PROMISE, will release in September 2022, and the third book – TEXAS DESTINY, will release at the end of December 2022.  All three books are/will be available on Amazon and in Kindle Unlimited. I’d love it if you would saddle up and ride away with me and my characters! There will be a lot of fun and, of course, lots and lots and lots of romance!

THANKS Peggy! Now let’s learn more about her most recent title: 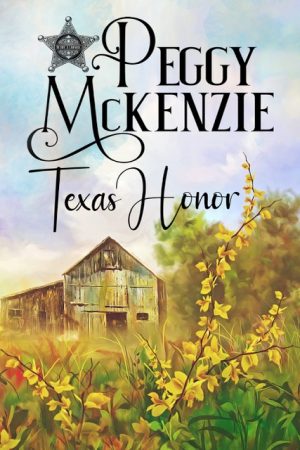 It’s simple. All he has to do is decide what matters most. His sense of duty or the love of this woman who may very well be the ruin of everything he holds dear.

Charlotte Johnson spent most of her adult life working as a bartender and occasional card dealer in the Holy Moses Saloon. And in all those years, she had made it crystal clear to anyone who pushed that she wasn’t one of the upstairs girls. But forced to defend herself against a persistent customer who refuses to take no for an answer, she hits him over the head with a spittoon bucket. It wasn’t the first time she’d defended herself this way, but this time something went terribly wrong. Now, the man was dead, and she has no choice but to run.

A widower with three angry children hell-bent on punishing him for their mother’s death, U.S. Marshal, Jeremy Maxwell, feels like a man twice his age. He’s painfully aware he’s walking a fine line between a responsible father and a dedicated lawman. So, when a stranger needing help arrives in his town, he’s convinced she’s the answer to his prayers. But soon, his lawman’s intuition tells him there’s something Charlotte’s not telling, and although the man in him wants to protect her, the lawman in him knows he has a duty to protect his town from her secrets. 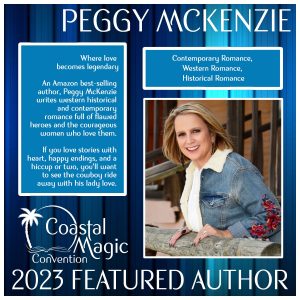 Amazon best-selling author, Peggy McKenzie fell In love with stories full of adventure, happy endings, second chances, and the romance of the old west. It wasn’t until she became captivated by Miss Kitty and Marshal Dillion’s love story that she decided this was something she had to do herself. She published her first romance in 2016 and since then, she’s been writing her own tales where the cowboy rides away with his lady love.

Now living in East Texas, she’s right smack dab in the middle of cowboy country, and she’s more determined than ever to fill her stories with rugged, flawed heroes and the courageous, strong women who lovethem. Her books are “where love becomes legendary!”

“You will not just read a story by Peggy McKenzie, you will live it.”Hildie McQueen-USA Today Best-Selling Author