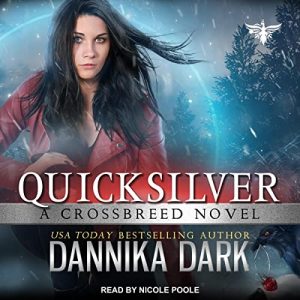 The team of Dannika Dark and Nicole Poole has fully entertained me once again with Quicksilver the 11th book in the Crossbreed series. The Keystone gang run into a bit of trouble while attending a Winter ball at Lenore’s home.

Lenore is a biotch and a half; she has done Christian wrong in the past, buried Raven, and now she is attempting to dig her claws into Vicktor. None of the Keystone bunch really like her with the exception of Vicktor, but I’ve never bought into their romance, it feels more like a business arrangement where Lenore is trying to lock in Vicktor to get more power.

I really ship Vicktor and Blue, and I want them to get a HEA by the end of the series. I realize not everyone in the group can fall in love with each other like Raven and Christian but there’s something there between the two shifters.

Quicksilver is suspenseful, the Keystone group must figure out how to undo a curse the villain, Sparrow a Mage, enacts at the ball. It leaves everyone in attendance in an undead state making them ghosts of a sort. They have 10 days to figure it out or they may turn into ghosts forever.

Raven panics that she will never get to see her human dad again, or rather he won’t be able to see and hear her if they don’t break the curse. She also is afraid she will loose Christian if she remains a ghost and they can’t have a physical relationship. Christian is swoon worthy in his attempts to let her know she is his “queen” and she will never loose him no matter what.

Quicksilver was a great addition to the series, and there are a few bread crumbs as to some things to come in the series. I can’t wait to get my ear buds on the next book! Readers who enjoy a blurry line between paranormal romance and urban fantasy will love Dannika Dark’s Crossbreed series and her other series as well. They are connected within the Breed world she has created. You can’t go wrong with any of her series.

In the world of crime fighting, Raven has learned that formal affairs are a necessary evil. So when Keystone receives an invitation to a winter ball, she tries to make the best of it. The most powerful elites in Cognito are attending—a perfect opportunity to network and have a few drinks. But when a guest hijacks the party in a violent display of dark power, chaos ensues.

It’s a race against time as Raven searches for a way to thwart his diabolical plan. Will Keystone find the fortitude to prevent the downfall of civilization? Or will they bow to a new king to save their souls?