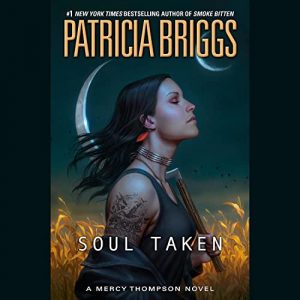 Soul Taken opens shortly after both the last Mercy outing and Wild Sign (Alpha and Omega #6). There is a lot to unload, including the fact that the mysterious Sherwood has regained his memories and there is upheaval in the local vampire seethe. In addition, it appears that a possessed artifact is loose in the Tri-Cities, with real life imitating art. Once again, it’s up to Mercy and Adam to protect the Tri-Cities and its inhabitants.

As the thirteenth Mercy Thompson title and nineteenth overall book in the Mercy Universe, Soul Taken is not a place for newbies to start. The story continues to build upon previous events, assuming a baseline knowledge of the characters and setting. The author does a great job of reminding readers of previous events of significance without an overload of information.

As always, Ms. Briggs compiles a story that is completely engrossing and fascinating. She weaves a detailed web of facts, shared in an array of scents, sounds, and visual clues. Being able to process them via Mercy’s eye and thought process gives the listener an encyclopedia of knowledge. And because we’ve been on this journey with Mercy, Adam, the wolves, fae, and vampires many times before, there is an emotional component that adds much to the tale. At times the story feels overly complex, but in the end it becomes clear. I love how Mercy questions things a lot because it gives me insight into what’s going on and the rules of the world. However, at times it seems like there is repetition in her thought process, especially early on.

Overall, Soul Taken is an exciting adventure. It feels like the stakes are higher than ever, which is something for a series of this length and caliber. I like that there are consequences from earlier events, and that we learn more about the vampires and the nature of bonds. I also like that there will be this threat over the pack until a certain bad guy is taken down. One of the best parts of the book is that the pack feels more settled (with the exception of Sherwood, which is working itself out). Mercy and Adam are very solid and the pack is strong and respects the Alpha couple.

Narration: The story is mostly shared via the first person POV of Mercy. Ms. King nails everything about Mercy from her confidence to her uncertainty; from her love for Adam to her distrust of those outside her inner circle. She is young yet wise, all which comes through in Ms. King’s performance. But it’s not just Mercy, Ms. King alters her voice effectively to convey a large cast of characters, each with his or her own voice, accent, emotional responses, and inflections. This time around the author added a somewhat lengthy passage shared from Adam’s third person POV. Ms. King continued with the same narrator voice, altering dialogue when necessary. (Note: I didn’t mind the Adam POV per se, but what chafes me a bit is the non-symmetry of it – in the book and in the overall series. I’m too type-A.)  I cannot sing enough praise for Ms. King’s narration of the Mercy Thompson series.

In the end, Soul Taken is an excellent addition to the Mercy Thompson world and a must-read for fans of the series.

My Ratings
Story: A-/B+
Narration: A+

The vampire Wulfe is missing. Since he’s deadly, possibly insane, and his current idea of “fun” is stalking Mercy, some may see it as no great loss. But when he disappears, the Tri-Cities pack is blamed. The mistress of the vampire seethe informs Mercy that the pack must produce Wulfe to prove their innocence, or the loose alliance between the local vampires and werewolves is over.

So Mercy goes out to find her stalker—and discovers more than just Wulfe have disappeared. Someone is taking people from locked rooms, from the aisles of stores, and even from crowded parties. And these are not just ordinary people but supernatural beings. Until Wulfe vanished, all of them were powerless loners, many of whom quietly moved to the Tri-Cities in the hope that the safety promised by Mercy and Adam’s pack would extend to them as well.

Who is taking them? As Mercy investigates, she learns of the legend of the Harvester, who travels by less-trodden paths and reaps the souls that are ripe with a great black scythe. . .