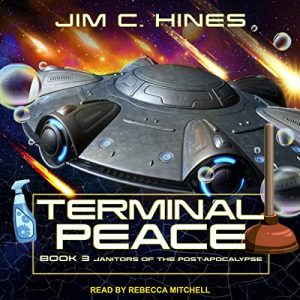 After stopping Admiral Sage from creating more feral super soldiers, Mops and her motley crew join the Earth Defense Fleet, upgrade the EDFS Pufferfish, and set out on a secret mission to find a weapon that can stop the xenocidal Prodryans. Yet when they meet the mysterious Jynx, the crew learn many secrets and surprises that may draw them into a brewing civil war on Tuxatl.

Terminal Peace is the final story in the delightfully entertaining Janitors of the Post-Apocalypse series. This trilogy should be read in order, with each book a standalone adventure, but building upon the previous tale to create the overall story. The series is an entertaining and humorous space adventure with a spunky heroine and her cast of unlikely heroes. The crew continues to adjust and think outside the box as they grow into their own, learning and going beyond what they believed capable. Things are made even more difficult for the crew as their leader, the unflappable Mops, learns that her body is rejecting the Krakau cure and she is reverting to her feral state. This gives opportunity for the supporting characters to shine in new rolls. Mops is a great character: one of those underdogs who is destined for more, but it looks like maybe her time is up. This adds urgency and a layer of emotional that wasn’t present in the first two stories.

Terminal Peace shares a solid story and brings a satisfying end to the trilogy. I enjoyed the progressing storyline and how the author ties it all into the larger picture. The evolution of the crew and the friendships is well done. The addition of a whole new species is both a good and frustrating aspect. I liked how the Jynx race is the X-factor needed to balance the universal scales. The fact that they are isolated yet hold such power is handled well. They want to be left alone and have the means to do it. However, adding a new world and species also added a lot of volume to the book as the author creates the setting and explains the history, and the story felt long and drawn out at times.

Narration: Overall, the performance by Ms. Mitchell is solid and entertaining. The story is primarily shared via the third person POV of Mops, but it is also shared from the POVs of a couple of the supporting characters. While the narrator maintains the same voice, Ms. Mitchell gives just enough variation between the different characters that I was able to know who was speaking just by voice. Additionally, the narrator gives each character and race its own suitable flair – the “mechanical” feel of the Grom, no-nonsense from Monroe, panicked wonder from Kumar, etc.

I’ve really enjoyed my time with the Pufferfish and her crew. What started as humorous adventure (space janitors?!) turned into a serious, yet fun, and emotional sci-fi. I highly recommend.

The third and final book of the Janitors of the Post-Apocalypse follows a group of unlikely heroes trying to save the galaxy from a zombie plague.

Marion “Mops” Adamopoulos and her team were trained to clean spaceships. They were absolutely not trained to fight an interplanetary war with the xenocidal Prodryans or to make first contact with the Jynx, a race who might not be as primitive as they seem. But if there’s one lesson Mops and her crew have learned, it’s that things like “training” and “being remotely qualified” are overrated.

The war is escalating. (This might be Mops’ fault.) The survival of humanity—those few who weren’t turned to feral, shambling monsters by an alien plague—as well as the fate of all other non-Prodryans, will depend on what Captain Mops and the crew of the EDFS Pufferfish discover on the ringed planet of Tuxatl.

But the Jynx on Tuxatl are fighting a war of their own, and their world’s long-buried secrets could be more dangerous than the Prodryans.

To make matters worse, Mops is starting to feel a little feral herself…