Audiobook review: To Catch a Raven by Beverly Jenkins 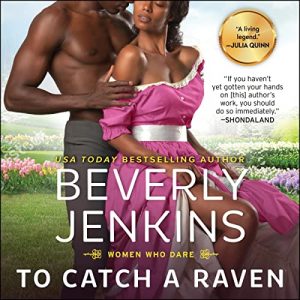 Braxton Steele enjoys his fairly privileged life living in Boston and working as a tailor. When a Pinkerton agent comes to his home, telling Brax and his father Harrison that she’ll send them to jail if they don’t help with her plans, Brax learns that his father once made a living as a conman.

Harrison takes the trio to New Orleans, where he introduces the agent to his former love, Hazel Moreaux. They are to send her daughter, Raven, and Brax into the home of a South Carolina senator to steal a rare copy of the Declaration of Independence which the senator stole, or she’ll put them all in jail on false charges.

To Catch a Raven is the third and final, standalone story in the Women Who Dare historical romance series which features strong Black heroines and their feisty matches. Each is loosely related to an earlier book/series in Ms. Jenkins’s catalog.

I really enjoyed To Catch a Raven (and the previous two books). I love how the author gives readers details of her characters’ every day lives so we experience how they live and eventually grow to love one another. I enjoy and appreciate that Ms. Bev includes a rich history of the times and setting of Black lives: something that wasn’t taught in my school. The story is filled with common, everyday tasks, but is also a dangerous adventure. I feared for the couple a few times as they worked in a dangerous situation under threat of jail and even death.

Brax and Raven have a beautiful, well-balanced relationship, and I love their dialogue and actions. They support one another in all aspects and don’t run over one another. They start out as two individuals on opposites sides of life in many ways: economically, morally, and even in their home cities, and end in the union of two evenly-yolked individuals who become one.

Narration: The story is primarily shared via the third person alternating POVs of  Brax and Raven, with a few other POVs tossed in from time to time. Ms. Staunton employs a solid feminine voice for her narrator regardless of the POV. It’s calm and strong but on softer side, and reminds me of a beloved teacher. She alters the dialogue based on gender, age, locale, and class. The changes aren’t significant, but enough to know different people talking. Ms. Staunton adds to the overall reading experience.

In the end, To Catch a Raven is a highly entertaining, delightful listen.

Lying and cheating may be sins to some people, but for Raven Moreaux, it is a way of life. She comes from a long line of grifters and couldn’t be prouder…Until she’s forced to help the government.

A former Confederate official is suspected of stealing the Declaration of Independence, and Raven, posing as his housekeeper, is tasked with getting it back. Her partner is the too handsome Braxton Steel. Masquerading as a valet/driver, Brax is also supposed to be her “husband.” He has his own reasons for doing this job, but when their pretend marriage ignites into fiery passion, they’ll have to put everything—including their hearts—on the line