Audiobook review: You Get What You Give by Karen Grey 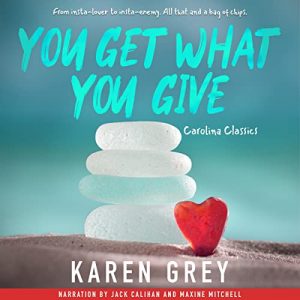 Violet left her teaching job to follow her dreams and opened up her own casting business based on promised work for the new Lawson’s Reach TV show filming in town. Nate just moved from Hollywood where his family is a powerhouse in the casting industry. He’s agreed to open a branch of the business in town, unaware that Vi is already handling the local business. Unfortunately a family feud between Nate’s father and uncle put Vi and Nate at odds; however, their mutual attraction and a few outside forces, bring the pair together.

You Get What You Give is the first in Ms. Grey’s Coastal Carolina series, centering on five friends who grew up in a small beach community. Set in the 1990’s the story references pop culture and everyday items from the decade; most notably, Dawson’s Creek, which is mirrored in the fictional Lawson’s Reach. The book shares the journey of Vi and Nate, but the other four friends (Sully, Ford, Whiney, and Dani) are a big part of the story.

Overall, I enjoyed Nate and Vi’s story. The pair must overcome several issues, including the family drama that puts them on opposing sides. Since we are privy to both character’s POVs, we know that each is not only attracted to the other, but genuinely likes them as a person, outside of the casting business. While Vi has every right to hate Nate, her friend Sully helps her see past the surface and look deeper at Nate the individual. I did love the couple and how they learned to communicate, and I think that they have potential.

With that said, I have a few issues with the overall story. First, there is a lot of drama in the friend group, including an unresolved love triangle between Whitney, Ford, and Sully, which takes up a lot of space in the book. It adds tension and drama, but takes away from Nate and Vi’s journey. All five of the friends seem to have some serious issues causing them to come off as immature and whiny. They have no communication skills and seem to run from their problems. Even Vi attacks Nate rather than leaning into him and telling him she loves him.

I also have an issue with the entire last chapter of the book. From the opening indicating what would happen, to Dani’s obsessing over a friend’s shocking news, to the cliffhanger ending. What we didn’t see is Nate and Vi together and settled back in NC getting their HEA. The entire ending left me feeling unsettled and unsure.

Narration: The story is shared via the alternating 3rd person POVs of Nate and Vi, with multiple POV shifts each chapter. Maxine Mitchell (MM) uses a slight southern accent for her females from NC. Sometimes I had trouble distinguishing between Vi, Whitney, and Dani when they were all talking together, but overall, she has a large array of voices. MM pitches her voice lower for males and does a very good job sounding like a cast of many.

Jack Calihan (JC) has a very deep voice, sounding much older than a 25-year-old. While his voice is pleasing for the narrator portions of his performance, his cadence is a bit slower than MM. He does attempt lighter, softer voices for females, but it still sounds like a guy doing a female voice. He adds in accents and adjusts his dialogue somewhat effectively for gender and age.

In the end, You Get What You Give is a solid start to what could be a very entertaining series. I enjoyed meeting the characters and exploring their quaint coastal community. With so many moving parts and much unfinished business, I look forward to the next story and finding out more about this group of friends.

From insta-lover to insta-enemy. All that, and a bag of chips.

In a sleepy southern coastal town crowned the Hollywood of the East, worlds collide, and sparks fly when fate has two TV casting directors acting as accidental rivals.

It’s not just that the town isn’t quite big enough for the two of them. Violet Davenport brings deep roots, local allies, and old-fashioned Southern charm to the table. Nate Fowler’s got deep pockets, tech knowhow, and a family that’s been in the biz since the silent film days.

For their businesses—and their hearts—to survive, they’ll have to overcome both a bitter hostility and a sweet insta-temptation.

In this enemies-to-lovers, new-in-town, one-night-stand unlikely love story, a girl boss and a Hollywood bad boy find that you only get as good as you give.

Reviews in the Series:
I’ll Stand by You by Karen Grey (Boston Classics #4.5; Carolina Classics #0.5)