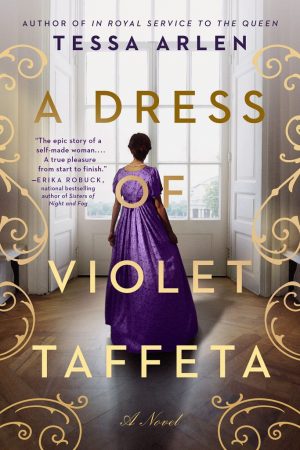 I want to start by saying I was interested in this book because I am a bit familiar with Lucy, Lady Gordon Duff and her struggle to become a Couture designer in a world where only men were allowed to put their names on designs. Ms. Arlen did a fantastic job with this part of Lucy’s story; she described her struggle to make a name for herself while working to provide for herself and her young daughter in a world that was at best tolerant of widows and horrific to divorced single moms. Ms. Arlen describes the nonstop work, the struggle to feed her family and find time to give her young daughter the attention she needed, not unlike moms throughout time. She also does a beautiful job describing the friendship and trust that is built between Lucy and Cecila, which is vital to the story, along with the often strained relationship with her family members. She captures the designs, fabrics and colors so exquisitely that picturing them in my mind was easy and delightful. The highs and lows of building a business while living in the ton as a single parent and the friendships and clients she acquires are described with the same detail that Lucy gives her designs.

Ms. Arlen gives a lot of time and energy into describing how Lucy builds her design house through the acquisition of American clients, so much so that when Lucy goes to New York, I felt like Ms. Arlen stumbled through describing her time there. There was so much name dropping and gossiping in that part of the novel that I felt like I was reading the gossip magazine of the 1900s. Maybe that was the goal, but it felt mucky and unnecessary to me. I felt the time could have been better used to describe her relationship with Cosmo, other friendships, or designs she was doing rather than reliving all the gossip of the time. If I wanted to read that much gossip I could find the magazine from the time period. This section is one of the biggest reasons I dropped my grade.

I don’t know how to describe my issues with the end of the book without dropping a few spoilers so if you don’t want any spoilers stop now and know that the book overall was fine. It gets bogged down in places but overall was a pretty good read, especially if you like novels based on real people.

The last part of the novel deals with Cosmo and Lucy’s experience on the Titanic and their survival. I felt like this could have been much more descriptive, as Cosmo was a major person in the trials that took place in London after the sinking of the Titanic. His experience on the ship through the trials and after had a massive effect on him and the relationship between Lucy and him. This was a HUGE part of Lucy’s life, and it is glossed over and tied into a weird little bow at the end. It doesn’t fit either character or the actual life they lead and left me feeling frustrated and unsatisfied.  This is why I dropped the grade from a B to a C. I could overlook the thickness of their time in New York, but I couldn’t overlook the complete disservice that was done to Lucy and Cosmo’s life changing experience that was the Titanic and its aftermath.

Like I said earlier, overall the book was fine. It shines in some places and fades in others, but if you are unfamiliar with Lucy, Lady Gordon Duff, and all she did for the world of female fashion and want a book that will give you a decent overall picture then A Dress of Violet Taffeta is a great place to start that journey, just remember this is a novel and you’ll likely want to find more information elsewhere afterwords to fill in the many gaps.

My Rating: C+ Liked It — But I had issues

A sumptuous novel based on the fascinating true story of La Belle Époque icon Lucy, Lady Duff Gordon, who shattered the boundaries of fashion with her magnificently sensual and enchantingly unique designs.

Lucy Duff Gordon knows she is talented. She sees color, light, and texture in ways few people can begin to imagine. But is the male dominated world of haute couture, who would use her art for their own gain, ready for her?

When she is deserted by her wealthy husband, Lucy is left penniless with an aging mother and her five-year-old daughter to support. Desperate to survive, Lucy turns to her one true talent to make a living. As a little girl, the dresses she made for her dolls were the envy of her group of playmates. Now, she uses her creative designs and her remarkable eye for color to take her place in the fashion world—failure is not an option.

Then, on a frigid night in 1912, Lucy’s life changes once more, when she becomes one of 706 people to survive the sinking of the Titanic. She could never have imagined the effects the disaster would have on her fashion label Lucile, her marriage to her second husband, and her legacy. But no matter what life throws at her, Lucy will live on as a trailblazing and innovative fashion icon, never letting go of what she worked so hard to earn. This is her story.