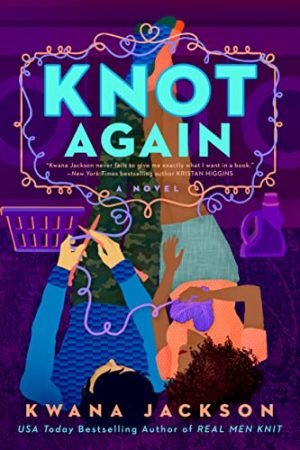 Knot Again by Kwana Jackson follows Real Men Knit as book two in her Real Men Knit series. With a year of distance from the first book, the cloud of mourning over the loss of Mama Joy Strong has lifted. It feels okay to feel okay. Except, firefighter Lucas Strong, one of Mama Joy’s four adopted sons, doesn’t feel okay. He’s not sleeping.

When he’s not at the firehouse, Lucas has a room in the Strong family home above the Strong Knits store in the Harlem area of Manhattan, New York. He at least finds some peace at Scrubs, the 24-hour laundromat across the street. It’s probably no coincidence that his favorite place to hangout is owned by the grandfather of his high school crush, Sydney Harris.

The story begins after Sydney, divorced and humiliated by her cheating husband, has come home to Harlem. She puts up a front that she’s come home to help out her grandfather who is in declining health, but really, she’s hiding from her socialite friends back in Washington, D.C. Lucas Strong gave her nothing but grief in school and is not a complication she needs no matter how good looking he is.

Because of their prior relationship as neighbors and schoolmates, the story doesn’t easily fall into an enemies-to-lovers nor friends-to-lovers trope. Building on their past, a lot of the story’s set-up is told in flashbacks, and for me, spends too much time there. Both characters spend too much time in their own heads. It reads more like a slice-of-life than a typical romance, lacking a quantity of dialog or banter which would keep the story in the present. There’s very little conflict. In fact, as most of the conflict has already taken place, the characters are just now trying to repair the aftermath. They do reach a satisfying HEA.

I still enjoyed the small-town feeling Jackson has painted of Harlem with nosey neighbors and everyone all up in each other’s business, despite the fact that it’s in the middle of Manhattan. We had much less interaction with the other Strong siblings in this book. They show up in moments, but are not as present as they were in the first book since their mother’s knitting shop is now recovering from her loss. Still, there are two brothers to go who need their HEA and I am invested.

Sometimes fireman Lucas Strong feels like he can only find any peace and quiet at the local laundromat, where every day is rinse and repeat — until a fateful run-in with his high school crush.

Hoping to attract more customers to his family’s knitting shop, Lucas Strong participated in an FDNY charity calendar and accidentally became a local celebrity. The only place he can find solace is Scrubs—a 24/7 laundromat where he can disappear for a couple of hours. But Lucas’s soapy sanctuary is shaken by an inquisitive little girl with a late-night interest in knitting, whose mother is his old school crush.

Sydney Harris knows that Harlem is like any other small town, and everyone is probably whispering about how she left such a good man—and a good life—behind to wash and fold laundry by the pound. If only they knew the truth. But Sydney will always put her daughter’s happiness first, even if that means moving back to Harlem and facing her past.

What Sydney never expected was to see Lucas again. A long-forgotten attraction kicks into high gear as Lucas and Sydney start to spend time together at the laundromat, and they must decide if this is true love or just an infatuation, thin and fragile as a soap bubble.