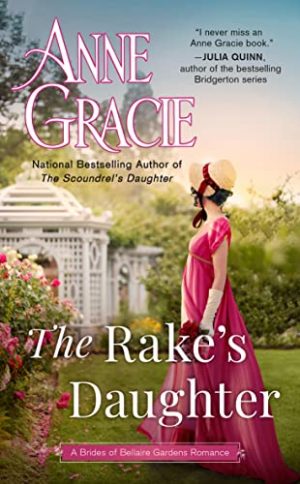 The Rake’s Daughter felt like a blend of several well know stories; enjoy Pride & Prejudiced? You’ll get touches of that here. Love Cinderella? You’ll get touches of her too. Shakespeare? Yep him too. Maybe that’s why I struggled a bit with this book; it felt like there were too many other authors writing the story, and I just really wanted an afternoon with Ms. Gracie.

Were the character well developed? Sure. Izzy and Clarissa’s sisterhood is beautifully depicted. Aunt Olive adds just a touch of eccentricity to the Victorian setting. Race is the perfect best friend letting everyone believe he is a total rake. Leo is a handsome hero struggling between his heart and propriety. All in all, a perfect group for this novel, and I enjoyed my time with them, but I struggled with Leo and Izzy a bit.

They are very Darcy and Elizabeth, with an “I loath you” for much of the novel.  Izzy wanted Leo to know that he might be Clarissa’s guardian, but he is no way in charge of her. Leo tries to lay down the law while underestimating both ladies. It makes for several funny spots in the book and builds the chemistry between Leo and Izzy. We are shown over and over again how they are like oil and water; what we aren’t shown enough of, in my opinion, is how they soften and compliment each other. We know they’re attracted to each one other, but I don’t think attraction would be enough for them to fall in love, and definitely not enough to fall into bed together especially given Izzy’s backstory. I feel like she’d need to know she was loved before letting her guard down, and Leo doesn’t even kind of let that be known before taking her to bed. In that scene, and how he handles it after, he comes off very rake-like himself, which is shocking given his backstory. It’s like both characters forgot who they are in exchange for really great sex, and that isn’t like Ms. Gracie’s characters at all, so I dropped the grade.

Was the book a fun escape? yes! Will I read Clarissa’s book? yes! But was this the solid A-material I expect from Ms. Gracie? No. It missed the mark just slightly this time, but that can happen with any author.

Recently returned to England, Leo, the new Earl of Salcott, discovers he’s been thrust into the role of guardian to an heiress, the daughter of a notorious rake. Even worse, his wealthy ward has brought her half-sister, the beautiful but penniless Isobel, with her. Leo must find Clarissa a suitable husband, but her illegitimate half sister, Izzy, is quite another matter. Her lowly birth makes her quite unacceptable in London’s aristocratic circles.

However, the girls are devoted to each other and despite the risk of scandal if Izzy’s parentage is discovered, they refuse to be separated. To Leo’s frustration, nothing will convince them otherwise. Even worse, sparks fly every time Leo and Izzy interact.

Called away to his country estate, Leo instructs the young ladies to stay quietly at home. But when he returns, he’s infuriated to discover that Izzy and Clarissa have launched themselves into society — with tremendous success! There’s no going back. Now Leo must enter society to protect Clarissa from fortune hunters, and try not to be driven mad by the sharp-witted, rebellious, and intoxicating Izzy.

Reviews in the Series:
The Scoundrel’s Daughter by Anne Gracie (The Brides of Bellaire Gardens #1)