“You expect me to believe you had no other reason for selecting this particular room?” Despite his outrage, she saw puzzlement darken his gaze.

“What other reason would I have?”

At her reply, he limped forward and caught her by the arm then half dragged her out of the bathroom. With a vicious jerk, he opened the door she’d not opened and pointed to the opposite end of the short corridor.

“This hallway, madam, leads to my bedchamber.”

His words were ice chips scattering through the air. She shrugged, and one of the sleeves of her gown slipped off her shoulder. Frustrated, she tugged it back into place.

“You’re upset because I picked a room that happens to be next yours?”

Arms folded across his chest, the earl remained silent, his expression indicating he expected some sort of explanation from her. Completely at a loss as to what he wanted her to say, Victoria shrugged again. This time she was forced to pull both sleeves back up to her shoulders. She returned his glare, irritated they were arguing about what room she should be sleeping in when she could be soaking in a hot tub. 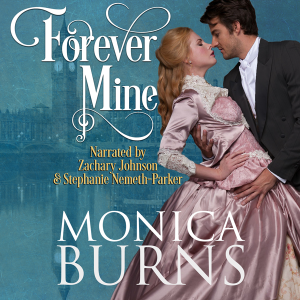 “What?” she snapped. Dark eyebrows arched in a disdainful sneer, Nicholas pointedly slashed his gaze toward her bed then returned his derisive look to her face.

“I have no intention of sleeping in your bed after all the lies between us, madam.” His cold declaration made Victoria’s mouth fall open before she narrowed her eyes at him.

“Of all the arrogant, egotistical…I didn’t have any idea this room was next to yours. Not that I care, because I have no intention of sleeping with you either,” she snapped as her own anger flared. The man was crazy if he thought she was interested in sleeping with him. In the back of her mind she heard a cackling laugh. She ignored it.

“Now this is the Vickie I’m accustomed to seeing.”

Smug satisfaction crossed his face as he mocked her. Infuriated by his condescending tone, Victoria fought back the urge to respond with a scathing retort. If she got angry, she might say something that would get her locked up in that asylum. She whirled around to stalk back to the bathroom, stumbling over the hem of her gown as she did so.

“Damn it,” she muttered as she regained her balance. She’d almost reached the bathroom when strong hands caught her arms, and she was tugged backward into a hard chest. Heat swept across her skin like wildfire then sank through her pores into her blood until it spread through every inch of her. Swallowing the knot about to close her throat, she tried to shake off his grip.

“Let me go,” she said, her words clipped as she tugged against his grasp.

“Why, Vickie?” he murmured. The warmth of his breath singed her earlobe. “Perhaps I should take advantage of our close proximity to each other. After all, you are my wife.”

The caustic remark made her go still. Did he really expect her…with a violent twist of her body, she freed herself from his grasp, tugging the straps of her sleeves back up to her shoulders. Her gaze met his, and heat skimmed over her skin once more as she stared up at him. God help her, the only smoldering looks she’d ever seen were in the movies, but this one outdid all of those. It took her thoughts in a dangerous direction. She gulped then drew in a deep breath.

“You can wish all you want, but it’s not happening, because I’m not your wife,” she said as a huff of frustration blew past her lips. “And stop calling me Vickie.”

“What exactly do you propose I call you?” he asked with more than a hint of sarcasm. She ignored his mockery.

“You hate being called Victoria. You think it makes you sound like a dowager countess,” he said coolly, but with a distinct note of confusion in his voice.

“What your wife prefers, and what I prefer are two different things. I’ve never liked being called Vickie.”

She lifted her chin in defiance, determined to make him use her real name. She’d hated being called Vickie all her life. It had always made her feel as if she’d done something wrong. Speculation darkened the eyes pinned on her before he nodded abruptly.

“Thank you,” she said. Surprise crossed his face, and she released a soft sniff of disbelief. “Let me guess, your wife never says thank you.”

“I don’t believe it’s in your vocabulary…Victoria,” he said with a small smile that hinted he was baffled by her behavior.

The moment he spoke her name, her skin tingled as if she’d just been shocked. There was a seductive quality to the deep timbre of his voice that made her heart race and released butterflies in her stomach. Even his green-eyed gaze made her heart jump in her chest. God help her if he decided to unleash the full force of his good looks and charm on her.

“If thank you isn’t in your wife’s vocabulary, and I refuse to let you call me Vickie, how much of a leap is it to accept that I’m Victoria Ashton, not your countess?”

“An impossible one.” The impassive, unyielding mask had returned to his face. “I admit your performance is quite remarkable, but I doubt I’ll ever be convinced you’re anyone other than my wife.”

“What would it take to convince you?”

The quiet sincerity and frustration in her voice seemed to touch a nerve in him. A strange look crossed his face, and he closed the distance between them. Victoria struggled to keep her pulse under control as his quizzical gaze warmed her skin. With a swift movement, he captured her chin in his strong fingers, his thumb tracing the fullness of her bottom lip. The unexpected caress made her quiver as her heart pounded a fierce rhythm inside her.

“I wonder,” he murmured, almost as though speaking his thoughts aloud. Mesmerized by his hooded gaze, anticipation sent a delicious warmth racing through her body. She licked her lips and drew in a quick breath as the earl’s head descended toward her mouth.

The instant his lips met hers, a wave of desire swept her out into the depths of a sea she’d never swum in before. Fire blazed its way through her limbs, and she trembled with an unexpected need.

Base instinct took control as she returned his kiss, her tongue teasing his lips apart until it danced with his. The growl reverberating in his chest sent a frisson tingling through her as she pressed her body into his. God, her knees were actually rubbery from his kiss. None of the other men she’d dated had ever made her feel wobbly like this.

Warm hands pushed the sleeves of her gown downward until she heard a soft ripping sound. The sleeves fell away from her arms, and the gown’s bodice fell to her waist. A low moan rose in her throat as his hand caressed the top of one shoulder before he wrapped his arms around her to pull her tight against him. Their kiss deepened as his tongue mated with hers in a furious dance of desire.

Thrown back to the year 1897, Victoria Ashton is mistaken for, and forced to impersonate, the spiteful, unfaithful Countess of Guildford, who’s been missing for three weeks. Despite Victoria’s attempts to convince the earl she’s not his wife, her double’s infidelity and lies make it difficult, especially when Victoria falls in love with a man who loathes her.

Nicholas Thornhill, Earl of Guildford, is plagued with rumors he murdered his missing wife. When she unexpectedly reappears, he scoffs at her latest in a long string of lies. But the changes in Victoria make him alter his opinion as he forges a bond with her that crosses the boundaries of time.